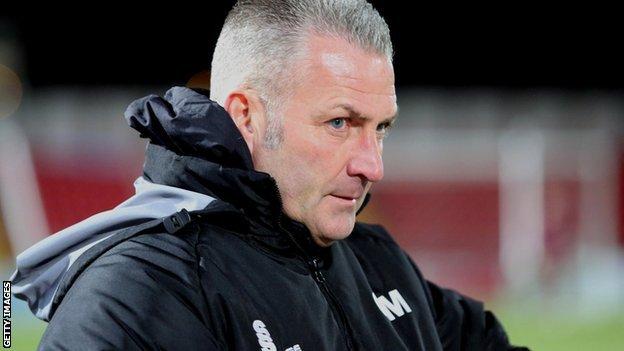 Manager Gary Mills believes Gateshead have a great opportunity to move into the play-off positions in the next three games.

Saturday's 3-1 win over Lincoln saw the Heed move up to seventh in the Conference Premier, just a point behind Grimsby in fifth.

We like to perform, we like to entertain, we like to play football, but you get to the stage where you have to win, no matter how

"Two of the next three games are at home, so we have a great opportunity," Mills told BBC Radio Newcastle.

"I know we can get there, but we have to work hard and keep believing that."

Gateshead's next three fixtures see them travel to struggling Aldershot, before facing Braintree and then Tamworth at home.

And Mills said that as against Lincoln, all that mattered now was getting the right result.

"We were comfortable at half-time against Lincoln," he explained, "but we started the second half really badly and put ourselves under pressure because of that.

"Lincoln play the way they play, you have to deal with these long throws and the ball getting forward early, and we didn't at the start of the second half. Fair play to them, that's how they play, but I was delighted to see the third goal go in.

"We like to perform, we like to entertain, we like to play football, but you get to the stage where you have to win, no matter how, and we did that.

"I've asked the players to believe since September that we can get in there at the end of the season, and we have a great opportunity to do that."