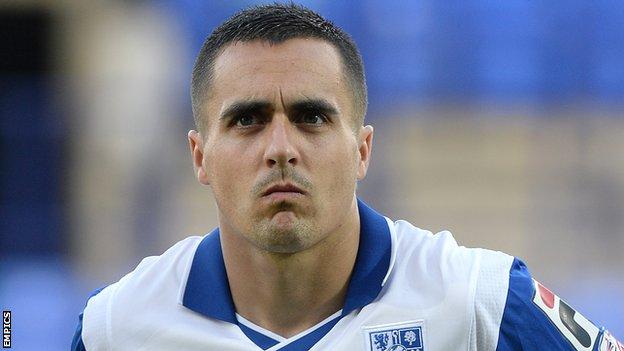 Northampton Town have signed Tranmere Rovers left-back Evan Horwood on loan until the end of the season.

The 28-year-old has made 18 appearances in League One this season, but has not played since January.

"Evan is an attacking full-back with a good CV behind him and he'll be a valuable addition," Cobblers boss Chris Wilder told BBC Northampton.

"I've known Evan for quite a while. He's played the majority of his football in League One."

Horwood began his career on the books of Sheffield United before having a series of loan moves that included spells with Stockport, Scunthorpe, York and Darlington.

He joined Carlisle on a free transfer in January 2008 before joining Hartlepool in July 2010, where he made 138 appearances.

Wilder said defensive reinforcements were urgently needed and said the arrival of Horwood, could mean a reshuffle at the back.

"With the loan window shutting, we needed cover in that position," he said.

The Cobblers are second from bottom of League Two, three points from safety, and Wilder admitted he is eager to bring in more players.

"With John Marquis going, we've brought Cristian Lopez in - who's a good player and a good finisher - but that's a key area where games are going to be decided.

"The boys at the back are doing good jobs and the goalkeeper, when called upon, makes a save or two - which is really good.

"Our games are going to be tight so, maybe, we need another option."