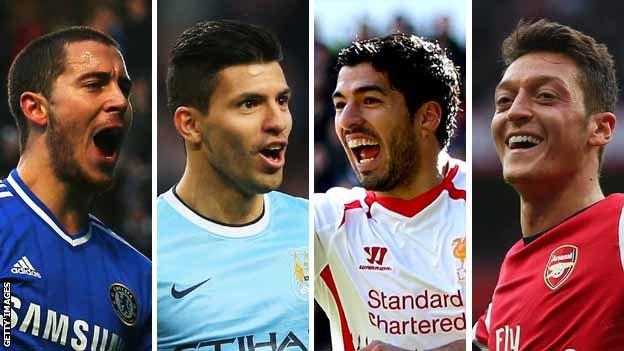 With just over six weeks of the Premier League season remaining, the division's top four teams are separated by six points in the most open title race since the competition began in 1992.

Leaders Chelsea are not contenders, according to manager Jose Mourinho. Manchester City, who no longer have to divide their attention between the Premier League and Champions League, are third, have two games in hand on the other sides in the top four and have been in excellent form, thrashing Fulham 5-0 and easing to a 3-0 win at Manchester United on Tuesday.

Arsenal's challenge has faltered following their 6-0 demolition by Chelsea and their 2-2 draw with Swansea on Tuesday, but they can inject new life into their bid for a first league title since 2004 when they host Manchester City on Saturday.

Liverpool, who play Tottenham at Anfield on Sunday, have won their past seven league matches and, in Luis Suarez and Daniel Sturridge, have the division's most prolific strikers.

Here, BBC Sport's experts give their verdicts on who will come out on top in the title race.

Throughout the team they have world-class players. They have a problem in one position at centre-back but, if you're going to have a weakness, it might as well be in the place where the other player - Vincent Kompany - is the best in the world. However, if they lose Yaya Toure and Kompany for any reason then I don't think they'll win it. They could cope without anyone else, but not those two.

Arsenal are six points off the top with seven games remaining. No team has made up a deficit that big after 31 matches of a season since the Premier League began. The biggest margin overturned came in 2011-12, when Manchester City won the title from five points behind.

Which player will make the difference? Yaya Toure. He has added to his game in a number of ways this season. He's dictating tactics, he's become a free-kick expert and he's playing cute through-balls to the strikers. When he's at it, he's almost a force of nature.

When did they convince you they were the real deal? When they brought in Alvaro Negredo in the summer. In the past they have had to rely on back-up players, people like Jo, who weren't of the same standard as the ones they were replacing. Adding Negredo showed that was no longer the case.

Which remaining game will be key? City's trip to Liverpool, and Chelsea's game there too. I suspect if Liverpool are going to win the title they will have to win both matches. If they do so, I'm sure they will be champions - but it's a lot to ask.

Will it go down to the final game? It wouldn't surprise me if it does and whoever is top going into that day will win the league. None of these teams would mess it up from there.

Who will win the title? Chelsea.

I picked Chelsea in my pre-season predictions so there can be no going back now, although Manchester City and Liverpool are a serious threat. Chelsea have a habit, especially under Jose Mourinho, of getting the job done even when not playing at their best. The danger for them is if they have one of those days, such as at Aston Villa or at home to West Ham United, when their finishing touch deserts them.

Which player will make the difference? Eden Hazard, simply because of the creative edge and X-factor he provides in the attacking third. He has been even more important because Chelsea's strikers have struggled to provide a consistent threat this season, although Samuel Eto'o has made several key contributions.

When did they convince you they were the real deal? When Mourinho was reappointed - his return was a game-changer. He inherited a strong squad and he is, quite simply, a master man-manager, coach and tactician. He has been over the course with Chelsea before and knows what is required. He is arguably the nearest thing in football to a guarantee of success.

Which remaining game will be key? Chelsea's game at Liverpool will be vital and Mourinho will be desperate to experience elation at Anfield after losing two Champions League semi-finals there, in 2005 and 2007. If Chelsea can come away without losing it will lift their chances and damage Liverpool's. If they lose, then anything can happen.

Will it go down to the final game? After the twists and turns of this season, it would be no surprise at all and there may be an injury-time goal that claims the title on goal difference - as when Manchester City won it in 2012. But does lightning strike twice quite as dramatically as that?

They have got the best squad. When you have top players and they can see another trophy within sight, it focuses them. World-class players are the difference in the last few games. It's only injury to key personnel that will stop them.

Which player will make the difference? David Silva. As good as Yaya Toure is, I don't think any other team in the Premier League has a player like Silva. He's always in space and he's extremely difficult to mark. He passes it simply but always looks forward. He just seems to skip over the ground. He's a bit like a ghost - he appears everywhere - and he's a fantastic foil for Toure.

When did they convince you they were the real deal? 19 August, when they beat Newcastle 4-0 on the opening day.

Which remaining game will be key? You can never say there's going to be a key game - it doesn't work that way.

Will it go down to the final game? No. I think it will be sorted a game earlier.

I said at the start of the season they would do it so it's only right I keep with them. At the time, I thought they would be too strong with Chelsea in transition and nobody could have envisaged the serious title challenge from Liverpool.

Which player will make the difference? David Silva is the player who makes City tick. The goals have dried up for Alvaro Negredo and they have had to manage without Sergio Aguero lately, but they have coped well.

When did they convince you they were the real deal? I decided City would win the title when they signed Fernandinho in the summer. He was a player who caught my eye with Shakhtar Donetsk and I thought that, once he settled, he would make an impact as a dynamic midfielder alongside Yaya Toure.

Which remaining game will be key? The visit to Anfield on 13 April followed closely by Liverpool v Chelsea on 27 April. Brendan Rodgers's side will have a say in the destiny of the title and, should they win both those games, Liverpool could even end their 24-year wait for a league title.

Will it go down to the final game? You wouldn't rule it out. A lot will rest on those matches at Anfield but also the impact of Chelsea's participation in the closing stages of the Champions League.

Having changed my mind several times, I'm now going for Manchester City. On song, they are the best team in the country and now there are no other trophies to go for, I sense a real togetherness and focus.

Which player will make the difference? It's hard to choose between David Silva, Yaya Toure and, when he returns from injury, Sergio Aguero. As the Argentine is out at the moment, I'll say Silva. He's in superb form and displaying a touch of genius.

When did they convince you they were the real deal? When they won at Old Trafford on Tuesday and did so in such convincing style. Manchester United's poor display rather took away from just how good City were. The win with 10 men at Hull in their previous away game also had City inching ahead for me.

Which remaining game will be key? The two at Anfield stand out - Liverpool at home to City and then Chelsea. I actually think the Liverpool-Chelsea game might be the really important one, as I could see them either cancelling each other out with a draw, or the team less in contention winning.

Will it go down to the final game? I think it will, and that City, Chelsea, Liverpool and Arsenal will all win their final matches. I can see City having a point or two advantage going into the last day, but that they'll need a result against West Ham. Not straightforward at all.

Have your say in the comments section and join the debate in Sportsday Live.