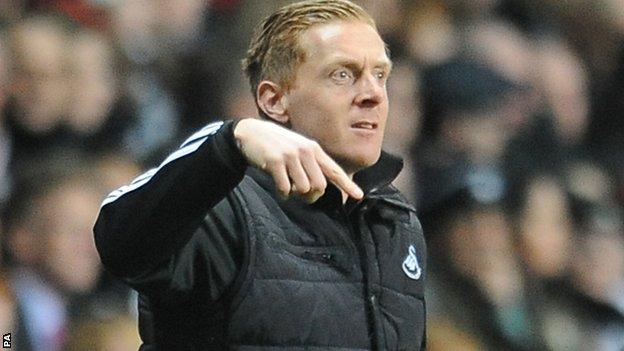 Garry Monk says Swansea City players are in the right frame of mind in their battle to stay in the Premier League.

The Swans are 15th in the Premier League and just four points above the relegation zone following defeat at Everton.

Despite a run of eight games in all competitions without a win, Monk is pleased with the attitude of his players, who face Arsenal on Tuesday.

"They want to get out of the situation that we're in," he said.

"Their attitude is spot on. They want to be out there every day and want to work hard.

"You have to worry about your own individual performances as well and really concentrate on what you're good at and cut out mistakes.

"There are no worse critics than the players themselves. They're all an honest bunch.

"I'm confident with this bunch [and] they're confident we can get out of this situation."

Monk knows the Swans' fate currently remains in their own hands but he accepts that points must start to be collected.

"We need points and we need to fight for every single one of them that is available," Monk added.

"We have to draw on the experience of last season, going to places like this [Emirates] and getting the result we want.

"It's in our own hands and we have to be very careful that we don't continue to make mistakes. We have to cut them out as quickly as possible."

Monk is expecting a tough challenge from Arsenal despite the Gunners' 6-0 defeat to Chelsea on Saturday.

"We are expecting a reaction from them. That's the message to my boys," Monk said.

"You can never see that sort of result coming, but obviously circumstances and stuff dictated the final score-line.

"They [Arsenal players] are experienced and top professionals, they are international players, and every now and again you do get a result like that.

"We will try to go up there with the right attitude and put on the right performance to come away with something."