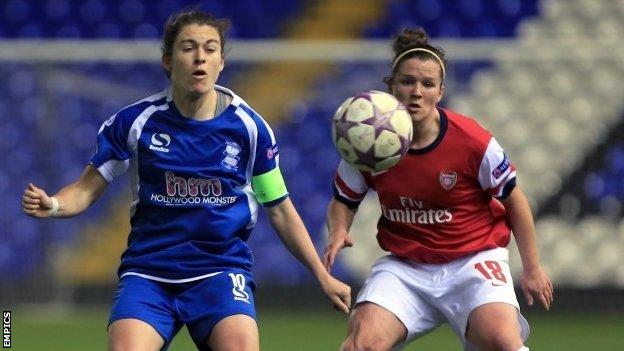 Birmingham pulled off a surprise, but deserved, win against Arsenal in the first leg of their Women's Champions League quarter-final.

Debutant Remi Allen hit the only goal to give Birmingham the advantage going into Sunday's second leg.

City manager David Parker said: "I'm immensely proud of the players but the job's only half done.

"Getting the goal was obviously vital, but what was very important was keeping a clean sheet."

He added: "We set up not to concede an away goal, and we've given ourselves a stepping stone to build on for the second leg."

Arsenal started brightly and pressed again in the closing stages but failed to force their former goalkeeper Rebecca Spencer into a single save.

"We didn't pass the ball as well as we can and we'll have to improve in the second leg."

The Blues should go into the second leg, at Barnet's The Hive , with confidence high after a fine showing at St Andrew's.

Like Arsenal, they were much changed from their Round of 16 line-up, having lost several key internationals in the ensuing four months.

And it was one of their new girls who hit the all-important goal.

The lead was almost doubled in the 36th minute when Kirsty Linnett's shot was cleared off the line by central defender Stoney.

Linnett was denied again 18 minutes into the second half, this time goalkeeper Emma Byrne diving to keep out the striker's 20-yard drive.

But the more experienced side failed to make it count, despite a late spell of pressure which brought a solitary chance which was hooked over the bar by Ohno.

The winners of the tie are virtually certain to face Swedish side Tyreso in the last four after they thrashed Austrian side SV Neulengbach in their quarter-final first leg.