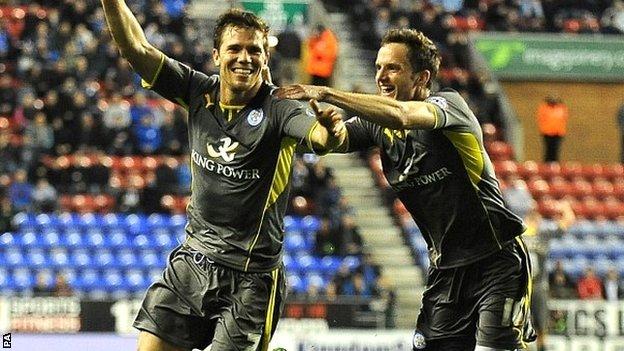 Dean Hammond's first Leicester goal rescued a dramatic draw for the Championship leaders at Wigan, keeping the Foxes' chances of returning to the Premier League this weekend alive.

Rob Kiernan's header looked to have won it for the Latics, but Hammond struck with three minutes left.

Leicester could go up if they beat Sheffield Wednesday on Friday and QPR and Derby both drop points on Saturday.

Leicester have scored at least once in each of their last 27 games, a run dating back to 9 November

In order for the Foxes to secure promotion, third-placed QPR must lose at Bournemouth and Derby, in fourth, must fail to beat Middlesbrough at the Riverside.

Hammond's goal extended Leicester's unbeaten run in the Championship to 20 games and they now hold a 16-point lead over QPR and a 17-point lead over Derby with seven games remaining.

Should Leicester win their next game, Derby fail to win and Harry Redknapp's side draw at his former club, Nigel Pearson's team will be 18 points ahead with six games left and only 18 points available. The Foxes currently hold a goal difference of 37 to QPR's 15, which would put them in an extremely strong position to get promoted.

In keeping with their run of form, Leicester began confidently and almost went ahead in the third minute when Liam Moore's header across goal from an Anthony Knockaert cross from the left was cleared off the line by Ramis.

After going close three times, Wigan's persistence finally paid off in the 37th minute when Jordi Gomez floated in an inviting free-kick from the left that Ramis powerfully headed past Kasper Schmeichel from 10 yards.

But the home side's lead lasted less than four minutes as David Nugent played a pass to the feet of King inside the box, who turned and calmly slotted the ball past Ali Al-Habsi via the post.

Schmeichel was in action again just past the hour to tip over a ferocious 20-yard drive from James McArthur.

But the Latics struck from the resulting corner, with Kiernan heading in another quality delivery from Gomez for his first professional goal.

The Foxes were not to be denied, though, and equalised in the 87th minute when Hammond got on the end of a Riyad Mahrez free-kick from the right to nod past Al-Habsi from 10 yards.

Wigan boss Uwe Rosler: "There's no question in my mind that Leicester will go up. I think if we continue like this we will end up in the play-offs.

"That was one of the best games I've seen in the Championship this season, I think two quality teams played each other and both were here to win.

"I felt the intensity and the tempo was very high. One of the reasons why Leicester are up there is they play a very high pressing game they are an intense, very fit team and we matched that today over 90 minutes."

Leicester boss Nigel Pearson on his team winning promotion: "I'm not taking anything for granted.

"It was another good night for us any positive result for us tonight would've put us in a slightly stronger position and that's what we've done."