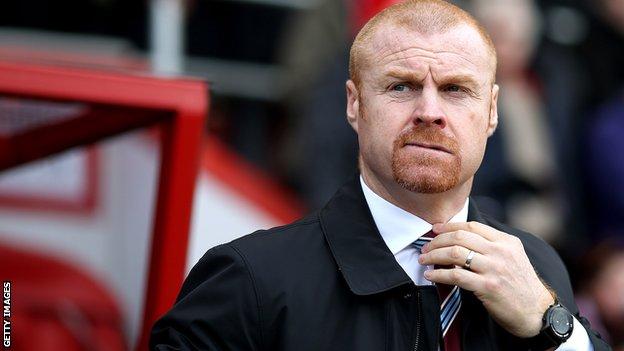 Manager Sean Dyche is not allowing the prospect of promotion to the Premier League to distract his Burnley squad in their final nine games of the season.

The Clarets, who are second in the Championship, are 10 points above third-placed Derby and QPR in fourth.

"We have to make sure the group is ready, organised and motivated for each challenge as it comes. I've stuck by that and I truly believe it."

The former Watford boss continued: "I'm not naive enough to think that you can plan so far in advance when you are working with a small group."

Burnley, who finished 11th last season, have lost just three of their 37 league matches this term, while their only defeat of 2014 came in the FA Cup at top-flight outfit Southampton.

Dyche says a strong "trust" between the players and his coaching staff has been at the heart of a hugely successful campaign.

"I've made them aware that I absolutely trust them and it's for them to decide if they let that trust down, not me," he added. "I think they trust what I do and what the staff give them.

"If you're asking them to give everything, which we are, you need to be physically and mentally rested.

"The reason I give them days off - and not many, by the way - is just to shut down. Then they come in fresh, and that freshness is key when you're asking everything of someone."

On Tuesday Burnley face Doncaster at Turf Moor, where the Clarets have not lost in the league this season, before hosting Championship leaders Leicester on Saturday.