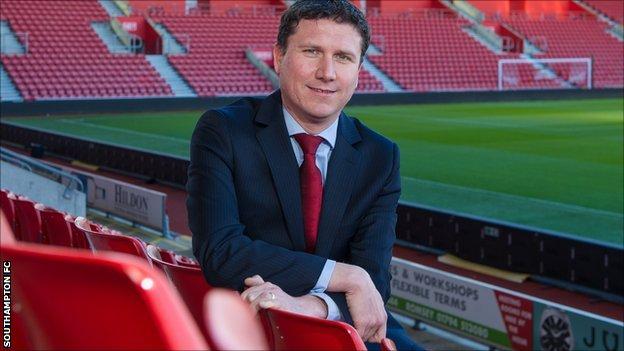 Southampton have confirmed the appointment of Gareth Rogers as their new chief executive.

Rogers had been interim chief executive officer following the departure of chairman Nicola Cortese in January.

"Gareth has done an excellent job leading our operation through a challenging and transitional period over the past two months," said chairman Ralph Krueger.

Rogers had previously been chief financial officer at the club.

He had held that role since March 2011 and prior to that he was a senior manager at the accounting firm Deloitte.

"It is a real privilege and an honour to be confirmed as chief executive officer of Southampton Football Club," said Rogers.

"It is clear from every facet of the club that a real sense of potential exists and we intend to continue to strive in order to reach this."

"Whilst there is significant work ahead of us, I cannot speak highly enough of our fantastic staff who I know, having worked with them for the past three years, are pulling in the same direction to ensure that the club can continue to better itself.

"Consequently, I look forward and am excited by the challenge of helping the club to grow, both on and off the pitch, as we strive for long-term success."

His appointment comes as Southampton continue with life after Cortese following his departure from St Mary's.

Cortese left after five years at Southampton, with owner Katharina Liebherr initially installing herself as his replacement.

However, Krueger was named new chairman earlier in March as Southampton's board continues to take shape.

Former Blackburn chairman John Williams had been approached about the role of chief executive but the club have preferred to recruit from within.

"Over the past two months he has proved himself to be decisive, open to innovation and able to inspire others to share his great values," added Krueger.

"His appointment is another important step forward for our leadership team as we continue to grow this great club."