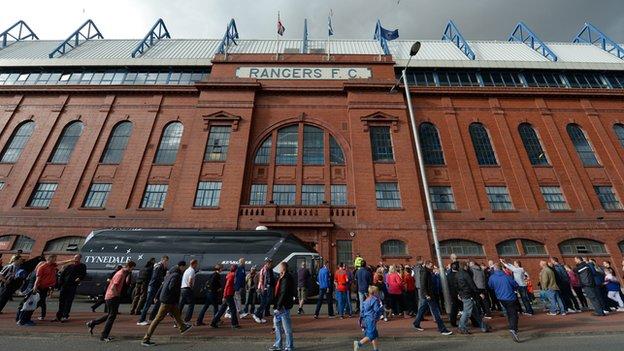 In stark language, Dave King has laid out his intentions.

For a Rangers board that is contemplating a business plan that was previously based on drastic cost-cutting, King's pledge to invest as much as is necessary of the £50m he believes is required to restore the club is essentially a challenge to them.

The figure is an approximation, and delivers a good headline, but it does reflect the investment that is required in the team, in the football infrastructure - there is still no scouting set up - and the upkeep of the property assets, most notably Ibrox and Murray Park.

Following King's meeting with the board two weeks ago, the Ibrox directors pledged to deliver a business plan that would enable the club to compete with Celtic again and play in Europe.

That requires significant investment, which the board must raise without borrowing against Ibrox and Murray Park, since they also committed themselves to not using them as security.

King has again urged the supporters not to take an adversarial stance while the board is conducting its business review and drawing up a plan for the future. He states that a conclusion will only be reached in the boardroom, but the people on the terraces do have an influence.

By putting their money into a season ticket trust fund, the fans would be using the club's main revenue stream for leverage. That can still be deployed, and progress is being made on setting up the trust fund, and the reality is that a solution needs to be found to Rangers' finances.

Graham Wallace, the chief executive, had previously committed himself to cost-cutting so that Rangers run on the reduced incomes of the lower leagues.

He is under increasing scrutiny by the fans after saying there was enough cash in the bank to sustain the club, only for the board to then agree a £1.5m loan from the shareholders Sandy Easdale and Laxey Partners on terms that were effectively acknowledging the high risk to the lender.

Wallace's original plan would delay Rangers' return to the club's former status, since even back in the Premiership they would not be able to match Celtic's wage structure. King has offered to underwrite a share issue, the board need equity investment; a solution is within reach for both parties. If the business plan does not match the board's commitments, then supporters and shareholders are entitled to ask why.

With the interim results due out later this week - they are likely to show a drop in losses - the onus is on the directors to reveal their hand.

As much as returning Rangers to the status of title challengers is about King's emotional commitment to the club, it also is the only means by which the shareholders will see the value of their original investment rise again.

They would also have the opportunity to invest further in a fresh share issue, to retain the comparative size of their stake. Rangers, in effect, need money from somewhere, having burned through the £22m raised when Rangers International Football Club was launched on the Alternative Investment Market.

King has made a number of public statements in the past two years, but this is now a sustained effort.

For a man so careful not to make a pledge that he cannot deliver on, the commitment to around £30m to £50m of investment and of taking on the task of restoring the club, seems like a significant moment. It is a fine line between that commitment and hubris, though.

The echo of previous misjudgements is evident when promises are made about large-scale investments and providing significant transfer funds for the manager. Sir David Murray wielded these statements throughout his time, but King is a different character.

Even still, the balance that ought to be struck is between a prudent, sustainable approach and the investment that King believes is required to allow Rangers to tap again into the commercial revenue streams that come with competing for the title and playing in Europe.

Money has to be put in before the club can realise its earning potential again.

There are other obstacles for King to overcome if he wants to be chairman, not least the Scottish Football Association's fit and proper person test and taking up a boardroom position on an AIM-listed company.

He agreed to a £44m tax liability, after years of dispute with the South African Revenue Services, and accepted liability for 41 counts of contravening Section 75 of the Income Tax Act. Fraud charges were dropped.

To Rangers supporters, though, King is acceptable because of his background as a lifelong follower of the team, his emotional and financial commitment to the club - he invested £20m under Murray and lost it all - and his acceptance following the court judgement in South Africa of his "mistake" in not engaging with SARS.

He has now talked about spending some of his children's inheritance, of the emotional importance of restoring Rangers to the club he grew up supporting. He has also left room for the board to work with him rather than against him.

The publication of the business plan early next month will reveal where this story goes next.

King states it is a game of chess. The next move is the board's.