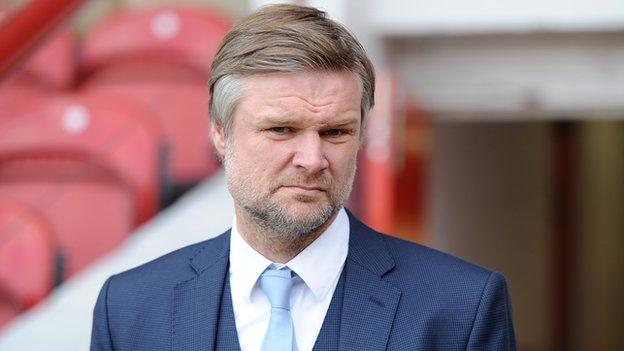 Coventry City manager Steven Pressley is hopeful of bringing in a new loan striker before Thursday's final transfer deadline of the season.

The Sky Blues have lost Arsenal striker Chuba Akpom, who has been surprisingly recalled by his parent club.

"I felt his situation where he was returning to Arsenal for certain games, didn't give him the chance to fully concentrate on his work for this club and that's what we need at the moment.

"As I have said from the turn of the year, it (lack of signings) isn't through a lack of effort, but because there is very little out there. It has never been a matter of resources. We're going to keep trying though, and hopefully get someone in before Thursday."

City have only won twice in 14 matches since Leon Clarke - now with Wolves - handed in a transfer request, at a time when co-striker Wilson was still out following shoulder surgery.

Since then, Wilson, League One's joint top scorer, has made light of Clarke's departure by returning to action in fine scoring form, finding the net in each of City's last five games.

But, having conceded 11 goals in four matches at the other end is of equal concern for Pressley, who has tried to add some steel by bringing in midfielder Anton Robinson from Huddersfield Town, managed by former Sky Blues boss Mark Robins.

"We've got to stop conceding silly goals," added Pressley. "Individual errors have let us down this season.

"If we are going to get the results we need from the rest of the season, we can't go on conceding the goals we are."

Coventry, who began the season with a 10-point penalty for going into administration, will start Wednesday's home game with fellow strugglers Stevenage just four points clear of the relegation zone and defeat would plunge the Sky Blues into the heart of the battle to avoid the drop.