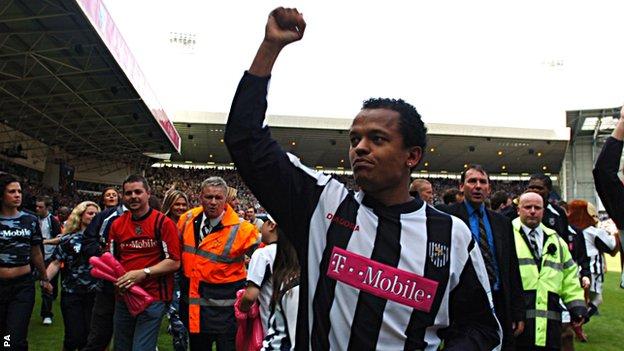 Ex-West Brom and Cardiff City striker Robert Earnshaw has drawn on his experience at the English club to pass on advice to their Welsh relegation rivals ahead of Saturday's match.

Nine years ago he was part of the Baggies side that stayed up thanks to a final day victory against Portsmouth.

The 32-year-old Blackpool forward believes the match at the Hawthorns is one the Bluebirds need to win most.

"If they [Cardiff] do, it's going to give them a huge lift."

Earnshaw's record at both clubs:

City are 19th and three points behind 16th-placed West Brom in the Premier League table.

Many pundits have already written off Cardiff's chances of staying up but Earnshaw says their plight is not as bad as the position Albion found themselves in back in 2005.

The Baggies had been bottom before the final round of matches started and as well as beating Pompey had to hope the three sides above them failed to win.

Bryan Robson's team were only in with a shout of staying up, having grabbed an unlikely point away at Manchester United in their previous match.

Welsh striker Earnshaw held his nerve that day to score West Brom's equaliser from the penalty spot at Old Trafford.

"The penalty was given and I was very calm. That's the one thing I remember still to this day," said Earnshaw.

"As I'm running up I'm thinking: 'I have to score this. It's one-nil to Man United and we need a point to stay in this league.'

"I saw the keeper just in the corner of my eye move to his left and I put it the other way.

"It was amazing. I used to support Man United as a kid. As soon as I scored it was like: 'Oh wow, I scored at Old Trafford'."

The precious point at United was followed by a final day win over Portsmouth and a nervous wait for the results of their relegation rivals.

"We had to wait two or three minutes for the other results to come in," said Earnshaw.

"It wasn't until people started running on the pitch that we knew we were safe. It was a great achievement."

Based on his experiences of his first season at Albion, Earnshaw says it is wrong to write-off Cardiff's hopes of survival with seven games to go.

"Cardiff are not done yet. They are nowhere near done," said Earnshaw.

"They could even go into the last few games safe...things could be much, much worse I think."

"They've got to go there [Hawthorns] and win the game and if they do it's going to give them a huge lift.

"It's just about looking at the last few games and picking up as many points as they can and not losing.

"But I think they've definitely got to go out, all out and try and win the game and not be overcautious."