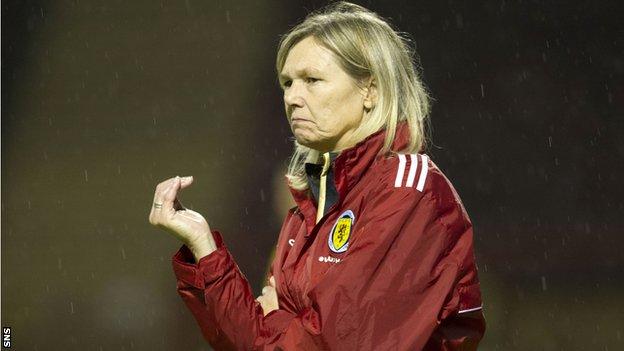 Scotland coach Anna Signeul has named her squad for the Fifa Women's World Cup qualifying double-header with Poland and Bosnia-Herzegovina.

The Scots are currently top of Group 4 with maximum points from their first four games, ahead of favourites Sweden.

"We defeated both Poland and Bosnia in the first half of the campaign, so we have an idea of what we will be up against," said Signeul.

"We will be prepared for two very tough matches."

Scotland face Poland at Fir Park on 5 April, before travelling to Zenica for the clash with the Bosnians five days later.

They have recently returned from the Cyprus Women's Cup, where they were unbeaten against France, the Netherlands and Australia before losing on penalties to South Korea in the final placing match.

"There is a lot of positivity around the national squads at the moment," Signeul told the Scottish FA website. "We have recorded some very good results recently, as have the men's squad.

"Our women's Under-17s reached the Euro finals in November and the Under-16s won the Victory Shield.

"That is down to a lot of hard work by the coaches and national team staff, but the investment in the performance strategy has been crucial.

"In terms of the women's national teams, we now have a bigger programme of training camps and matches. Keeping up this level of intensity has been very important for our development at all age groups.

"A key benefit for the senior women's squad has been our partnership with the Scottish Institute of Sport, which has transformed our strength and conditioning training and led to the players becoming fitter than ever."

Scotland defeated Bosnia Herzegovina 7-0 at Fir Park in September, and were 4-0 winners in October against Poland.

"Bosnia lost only one goal, a penalty, when they hosted Sweden so we know it will be a difficult place to go to," Signeul said of the two games. "But, we need to focus on keeping our momentum going."