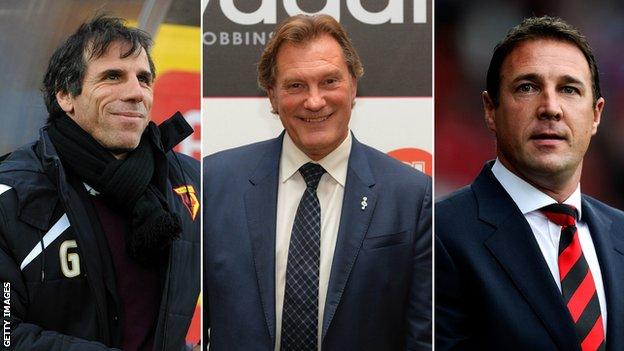 Gianfranco Zola, Glenn Hoddle and Malky Mackay are all being considered for the vacant managerial job at Nottingham Forest, according to new club ambassador John McGovern.

McGovern, a two-time European Cup winner with the Reds, has been named as advisor to owner Fawaz Al Hasawi.

He joined Forest after manager Billy Davies was sacked on Monday.

"There are a number of names, which have included Hoddle, Zola and Mackay," McGovern told BBC Radio Nottingham.

I never interfered with the manager this season. I am just the chairman and owner, full stop

"At the moment we are discussing the fors and againsts, strengths and weaknesses of the ones that are on the list."

Al Hasawi added he is trying to arrange to meet with Zola and Hoddle.

"Both are very good managers and we will have to sit with them and talk with them," he said.

"I have to speak with them first to see what their ambitions are and see what they can do for these [remaining] nine games and look at their plans."

Mackay, 42, was controversially sacked as Cardiff City boss in December, having seven months earlier masterminded their promotion to the top flight for the first time since 1962.

Former West Ham boss Zola, 47, resigned as head coach of Watford with the club in 13th place in December, having led them to the Championship play-off final last season, where they lost 1-0 to Crystal Palace. 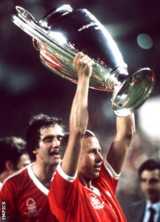 "The main reason that I'm here is that the chairman gives me lots of respect as a former captain of the club who did my best on the field and he is hoping that I have retained enough knowledge to give him a little bit of help off the field," said McGovern.

It has been almost eight years since former England boss Hoddle, 56, last had a job in management, when he was in charge of Wolverhampton Wanderers.

McGovern also said it was inevitable that a list of former players would continue to be linked with the job after former Leeds United, Crystal Palace, Sheffield United and Notts County boss Neil Warnock, now based in Cornwall, turned the job down on Monday.

McGovern insists the Forest job remains an attractive one with the club sitting just two points outside the play-off places.

However, the Reds, temporarily under the guidance of academy manager Gary Brazil, are now without a win in nine games following their 1-0 home defeat by Championship strugglers Charlton on Tuesday.

"Some may not want to go to the club because of its geographical position, others may not come to the club thinking, 'well if I come in and there are nine games left and I don't make it, then it's going to tarnish my reputation'," said McGovern.

"But I can't see that one being valid because we are at the right end of the league to come to a football club, whereas most management positions become available when they are struggling at the bottom."

Al Hasawi also responded to Warnock's fears that the Kuwaiti owner and chairman would interfere too much with any incoming manager.

"I backed Billy Davies from the beginning of the season with all the players he wanted and I didn't interfere with his job," said Al Hasawi.

"I am just the chairman and owner, full stop. I gave him [Davies] everything that I could.

"If you say an opinion, does that mean I am interfering? It's not, it's only my opinion. If I say 'why we don't play this player or that player?', it's just opinion. In the end, it's his call.

It was as if we were playing against Barcelona, not Derby, We might lose to them, but not 5-0. It really hurt me. We were really poor and I felt sorry for the fans - they deserve better than that

"With all respect for Neil Warnock, I never interfere with the manager's decision. The manager will say 'yes' or 'no', not Fawaz."

"We still had a chance [of making the play-off under Davies], but I don't want to risk it," said Al Hasawi.

"With this performance [loss to Derby] I don't think we will do it and that is why we need to change.

"It was as if we were playing against Barcelona, not Derby. We might lose to them, but not 5-0. It really hurt me.

"I decided to make the change after the Derby game. We were really poor and I felt sorry for the fans - they deserve better than that."