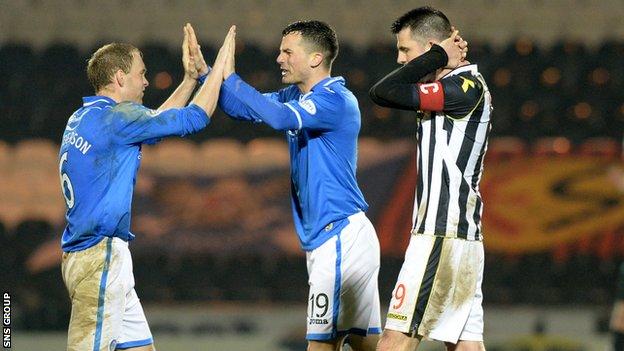 Manager Danny Lennon was at a loss to explain St Mirren's insipid 1-0 loss at home to St Johnstone.

"I'm scratching my head like the 3,000 in here tonight," the beleaguered boss told BBC Radio Scotland as the Buddies remain 11th in the Premiership.

"I'm disappointed because I thought it was going to be our night at home after three good performances.

"The players know they have let themselves down and everyone associated with the club."

"We know how tough each of the remaining seven games are going to be," added Lennon.

"It was a tight game tonight and we are going to need to fight together to get us out this.

"There are four, maybe five, teams trying to avoid the play-off position and there will certainly be a twists and turns to come."

The only goal of the game came on 39 minutes when Steven MacLean volleyed in from a corner and the visitors had little trouble defending their lead.

"I thought the opening 10 minutes and the first 10 in the second half were our best spells," said Lennon.

"But for large spells we failed to bring what we had in our last three games. We were at least two gears below what we are capable of.

"Just prior to St Johnstone scoring, Darren McGregor shaves the crossbar with an effort, then we find ourselves a goal down.

"I thought our decision-making was poor and we played into St Johnstone's hands, even when we went with two wide men and two up front.

"The players know what is at stake, our livelihoods in the Scottish Premiership.

"We have to make sure this club remains in this division. There have been too many bricks laid in the foundations here for that to fizzle out."