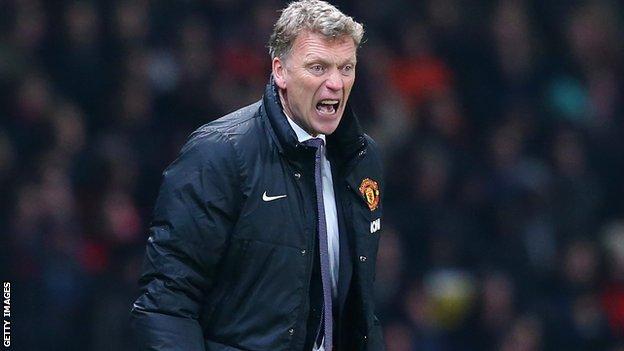 The reigning champions are seventh, 18 points adrift of leaders Chelsea after City inflicted of the season.

"I am the one who picks the team," Moyes said. "I take responsibility and always will do. It is disappointing.

"Put simply, United were a mess against City. They looked and played like a team in disarray, led by a manager struggling horribly to get to grips with his task."

The defeat means United have now lost more league games at home this season than in the previous three campaigns combined.

In nine matches against the Premier League's top five, they have won just once, against Arsenal in November.

Despite reaching the quarter-finals of the Champions League, United have fallen well short of the consistency which saw them win the title by 11 points under Sir Alex Ferguson before his retirement last summer.

"Everybody knows this is a job that is going to take a little bit of time to get the way we would like but that is the job," added Moyes, 50.

"Other clubs have had to do rebuilding jobs - we hope it won't take as long as some others but we have a period of time to get to that level.

"There are a lot of really good players in the squad, a lot of internationals, who, on their day, can be a match for most players."

The former Everton boss admits he hoped United would be "closer to the top of the league than we are at the moment," but believes his side did not "lack effort or commitment" against their city rivals.

City, who were the last team to deny United the title - in 2012 - scored through Edin Dzeko after 43 seconds at Old Trafford and the Bosnian doubled the lead before Yaya Toure struck a third late on.

"We never came out of the blocks," added Moyes. "We never got started. For Manchester City to score inside the first minute gave them a really big lift.

A rapid decline at United

After 31 league matches last season, United topped the table on 77 points - 12 clear of City. After the same number of games this season, the Red Devils are 26 points worse off, 15 behind their rivals who have two games in hand

"I told the players at half-time that we wanted to start the second half stronger and that we needed to play in their half but we never really got that."

United striker Wayne Rooney said the team's record at Old Trafford is "not good enough", adding: "We can't lose six home games in a season. We have to put that right and make this a place teams fear again.

"We know we have to respond. It's a bad night for us all but we have to move on."

Speaking to MUTV, Rooney added: "We didn't deserve to win. We weren't clinical enough and we didn't create enough chances.

"No-one likes to lose a derby game - they're big games and they're great to win, but when you lose it's not a great feeling."

Former United midfielder Paul Scholes has asked the club to stick with Moyes despite the defeat.

"You have to stand by him," Scholes told Sky Sports. "He's made a couple of signings that haven't quite worked out yet as he would have liked and in the summer he's going to need backing."

Scholes, who retired at the end of last season, added that the club need to strengthen in the summer, particularly in defence and midfield.

"Centre midfield you could say they've been looking for that for quite a few years now and maybe haven't quite come up with the answer," he said.

"I think defensively as well, with [Nemanja] Vidic going - it looks like Rio [Ferdinand] and maybe [Patrice] Evra are going as well, there's three of your back four gone - that's another area he's got to look after."