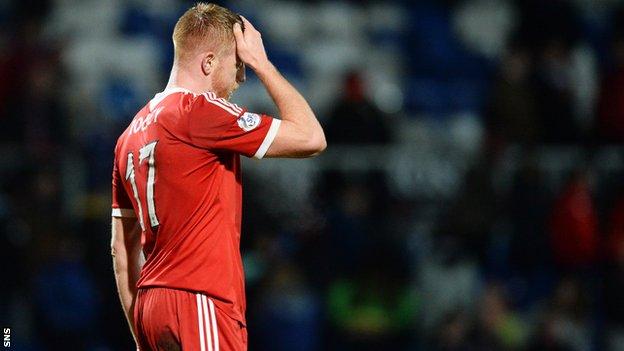 Derek McInnes was adamant Aberdeen were unlucky not to claim victory in the 1-1 draw with Ross County in Dingwall.

Adam Rooney's late equaliser rescued a point for the Dons after Melvin De Leeuw's header had the hosts leading from midway through the first-half.

Andrew Considine was also red-carded late on when he hauled down Graham Carey when he was clear on goal.

"Regardless of us having 10 men, if we had another five minutes we could have gone on to win that," said McInnes.

In a frantic 90 minutes both sides had chances to win the game. Jamie Langfield saved well from Yoann Arquin and Filip Kiss, while Aberdeen hit the woodwork three times.

Considine was given a straight red card when he hauled down Carey with three minutes to go, but Calvin Zola and Ryan Jack still had chances to grab a winner.

"I thought we dominated the second half," McInnes told BBC Scotland. "I think Ross County had a chance first-half to get their second goal which Jamie Langfield makes a good save from, but over the course of the game we asked question after question of Ross County.

The players did what they've been doing all season, they refused to be beaten and they kept going.

"We eventually scored after hitting the woodwork three times and even with 10 men we still looked as if we could score.

"I think both teams will feel they could have won the game if they took their chances, but I don't think anyone could argue we at least deserved a draw.

"We started the game excellently. First 20 minutes we had real control of the game. I thought at that stage we were the better side.

"The next 25 minutes we stopped winning headers, we stopped looking after the ball, we stopped being busy and affecting the game.

"But, second half, the players did what they've been doing all season, they refused to be beaten and they kept going.

"We had real tempo, real pace, real aggression with our running. It was one-way traffic at times."