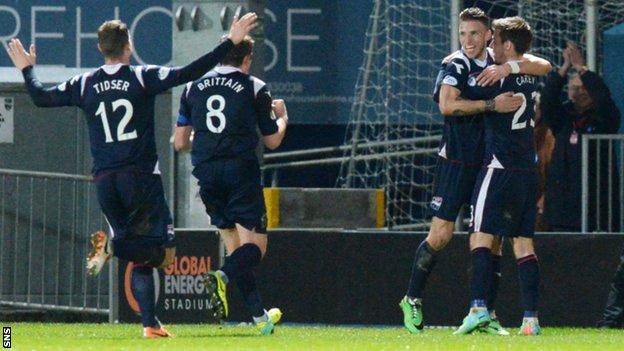 Ross County manager Derek Adams felt his side were most likely to find the winner in the 1-1 draw with Aberdeen.

Melvin De Leeuw opened the scoring midway through the first half, and Yoann Arquin also had a goal disallowed for a foul on Alan Tate.

Andrew Considine was sent off when he hauled down Graham Carey when he was through on goal late on.

Adams told BBC Radio Scotland: "I think the chances we had in the game were better than the chances Aberdeen had."

The Dingwall men could have moved five points clear of second-bottom St Mirren had they taken all three points, but Adam Rooney rescued a point for the Dons when he finished from close range.

However, Adams felt his side performed well, protecting their unbeaten record at home to the Dons.

"We were excellent tonight from start to finish," he said. "I know they've hit the post twice but we've been one-on-one with the goalkeeper two or three times in the game.

"Graham Carey's right through on goal and Considine takes him out of the play, and it looks like he's away to score as well.

"Overall, I thought we played very well. Aberdeen took on Scott Vernon, then they took on Calvin Zola as well and went very direct.

"They tried to go that route because we had dealt with their threat on the ground.

"We passed the ball well, we created lots of openings against an Aberdeen side who have won the League Cup this season and are riding high in the league.