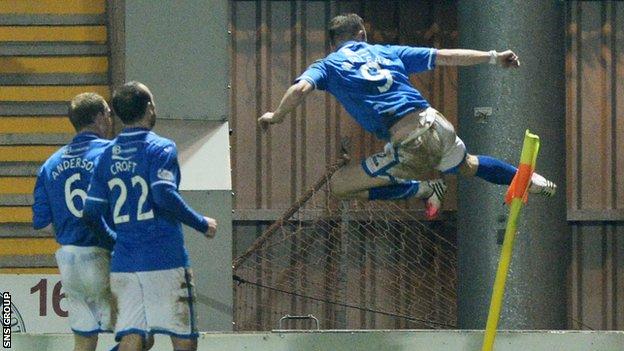 Assistant boss Callum Davidson is heartened by St Johnstone good run of form as they prepare for a Scottish Cup semi-final showdown with Aberdeen.

Saints made changes for the visit to St Mirren and ran out comfortable 1-0 winners.

"The semi-final is there and we need to make sure everyone is ready," Davidson told BBC Radio Scotland.

"There might be another couple of changes on Saturday to make sure everyone is up to speed."

St Johnstone have league games against Partick Thistle and Kilmarnock before the Ibrox meeting with the Dons on 13 April.

Top-scorer Stevie May was left on the bench in Paisley and Davidson was pleased to give the 22-goal striker a break.

"Stevie was just rested tonight," he said. "He has been absolutely terrific.

"But he's been running on empty for the last four or five games. After we clinched the top-six place, it gave us our chance to rest him.

"He needs that rest. He's been playing for Scotland Under-21s as well but he will be back buzzing for Saturday now.

"But we showed tonight we have other options. Michael O'Halloran came in gave us a dynamic threat up front with his pace.

"He worked well with David Wotherspoon and Lee Croft, so we do have different threats available to us when Stevie isn't playing.

"After the first 10 minutes, I thought we were superb and we had chances to kill the game off.

"The players want to win as many games as they can before the end of the season and put pressure on Inverness (who are four points ahead in the league)."