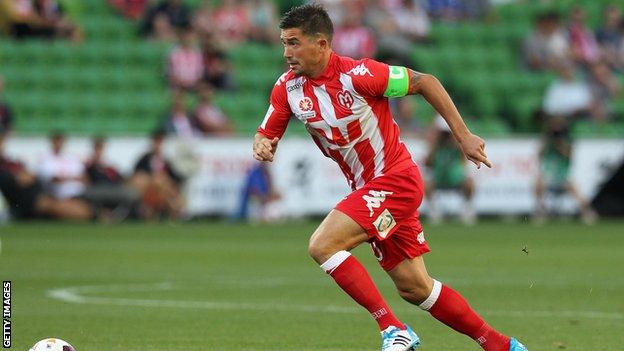 Former Leeds and Liverpool winger Harry Kewell has announced he is to retire from professional football.

He won 58 international caps and has been at Melbourne Heart since 2013.

His final appearance will be against the Western Sydney Wanderers in the A league on Saturday, 12 April.

But Kewell may be deprived of a swansong as he will miss the Heart's next two matches against Brisbane Roar and Adelaide United after suffering an abdominal strain in the defeat to the Central Coast Mariners last Sunday.

He returned to his homeland last year with the aim of winning a place in Australia's World Cup squad after playing in the two previous campaigns in 2006 and 2010, although he has missed over a third of his side's matches this season due to injury.

He was named his country's greatest ever footballer in a vote by players, fans and journalists in 2012.

"To achieve what he has done as a European player would have been amazing but to do it as an Australian player who needed to leave home as a teenager makes it a very unique and special story."

Kewell himself said on Twitter: "On my way to officially announce my retirement...Thank you for all the kind tweets you've sent so far..#EndofanEra".