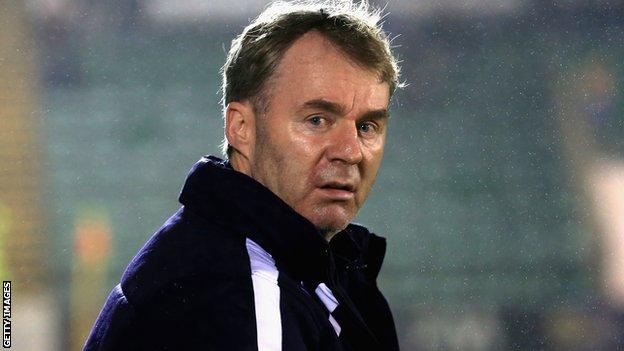 Plymouth Argyle manager John Sheridan says his side have "gone backwards" since they reached the play-off places.

The Pilgrims have dropped out of the top seven after on Tuesday and are now three points off the play-offs.

Can't they take it that we've got into the top seven?

"Since we've been going 'play-offs' and we've been in the play-off positions we've just gone backwards."

The loss at home to Exeter, where they led 1-0 at half-time, added to the frustration of their the previous Saturday where they also led.

"Can't they take it that we've got into the top seven? I just don't understand it," Sheridan added.

"I was very pleased with the first half, we got the goal and were one up in a massive game with a massive atmosphere.

"But I was watching different players going out in the second half when we should be on the up and raise our game and lift it.

"I can't keep looking at players one week and saying he's a good player and then looking at a different player the following week. It's hard to take sometimes."