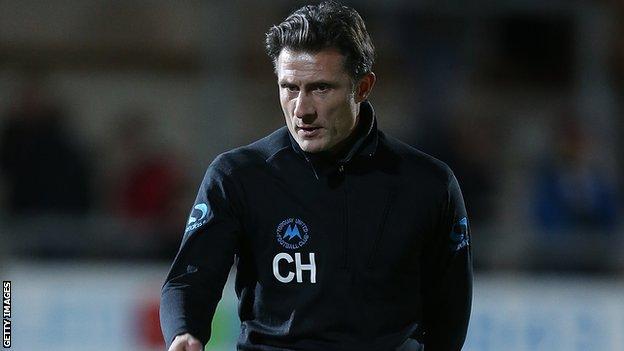 Torquay United manager Chris Hargreaves says it is unlikely the club will bring in any more players before Thursday's loan deadline.

The Gulls are still six points from safety at the bottom of League Two after a on Tuesday night.

"If I win the lottery tonight we might get a player," Hargreaves said.

"It's not really likely unless we can move and shift around some players, which is always a possibility."

Torquay have scored just five goals in their last nine matches, failing to find the net in six of those games, despite bringing in Enoch Showumni from Notts County, and

But Hargreaves says the funds are not available to add to his squad before Thursday's 17:00 GMT deadline.

"There are some fantastic backers at this football club and they are trying their best to keep the club not only afloat, but provide the club with a bright future," he told BBC Radio Devon.

"But there's not a bottomless pit so we've got to make sure we're diligent with trying to arrange deals that work for the club.

"It can't be just a quick fix because the club can't afford it.

"I'll be trying to get a player in but I couldn't guarantee it."