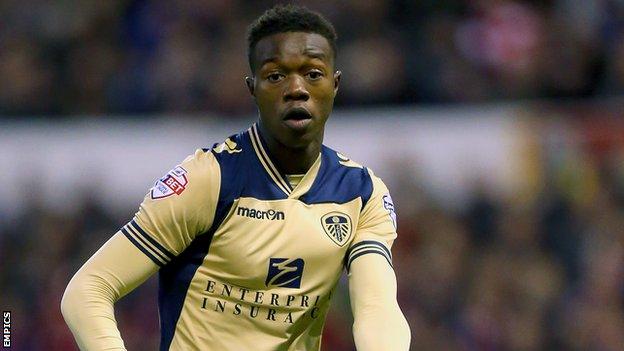 League One strugglers Tranmere Rovers have signed Leeds winger Gboly Ariyibi on loan until the end of the season.

The 19-year-old joined before Tuesday's 2-1 home defeat by Swindon and appeared as a first-half substitute for injured captain James Wallace at Prenton Park.

"He looked to use his pace. He's not got a lot of experience but he'll get better. There's potential there."

Ariyibi, who also had a spell with Southampton, has featured twice at first-team level for Leeds since agreeing a short-term deal at Elland Road in December.

Tuesday's defeat leaves Tranmere 20th in League One and only outside the relegation zone on goal difference.

McMahon added: "There are only so many times you can keep saying 'well done, keep going, keep going' but we will.

"It's up to myself and the staff to motivate the players and we'll do that.

"Confidence is fragile, and how do you get confidence? By winning games. At the minute, we can't seem to get over the line."