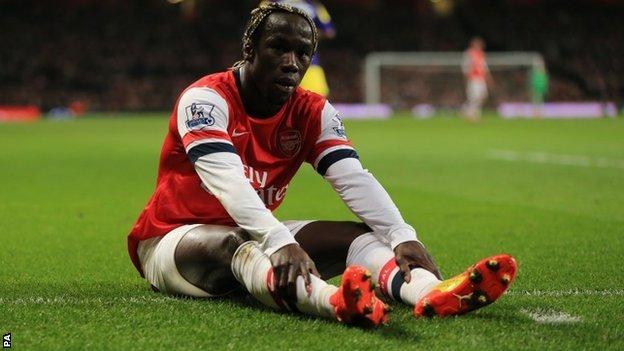 Inter Milan are interested in signing Arsenal defender Bacary Sagna when his contract expires in the summer.

But the Italians have not been in negotiations with Manchester United defender Patrice Evra, according to club president Erick Thohir.

"We're interested in Sagna because we need to balance the team," said Thohir.

If Sagna decided to stay in England, we'd understand and in that case we might bring in a young player from our academy

"Right now we only have [Yuto] Nagatomo and Jonathan. If one of them gets injured you need somebody else to come in."

Sagna joined Arsenal in 2007 and has made 275 appearances for the London club but has yet to sign a contract extension.

Thohir added in an interview on the Inter Milan website: "If Sagna decided to stay in England, we'd understand and in that case we might bring in a young player from our academy."

When asked if the club were interested in signing Chelsea forward Fernando Torres or Manchester City striker Edin Dzeko, Thohir said: "What I said is that we need someone up top.

"The media have written about those players and I mentioned that one of them would be good for Inter."

Thohir backed manager Walter Mazzarri despite the club being 31 points adrift of league leaders Juventus following a 2-1 home loss to Atalanta on Sunday.

But he said he will review the situation at the end of the season.

Thohir said: "Am I satisfied with Mazzarri's work? Yes, I don't have any problem with him or with the management. When it comes to the end of the season, we review everything."