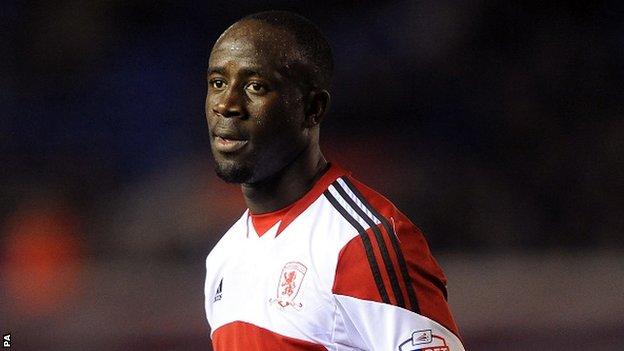 Middlesbrough manager Aitor Karanka believes Albert Adomah is becoming a team leader on and off the pitch.

Midfielder Adomah, 26, scored twice as Boro came back to secure a 2-2 draw at Huddersfield on Tuesday.

But what the Ghanaian international had to say during the break impressed Karanka just as much as his goals.

The Middlesbrough boss told BBC Radio Tees: "Albert was very good during half-time and showed us he is a leader here. He was perfect."

Adomah has now scored 11 goals in 35 Championship appearances for Middlesbrough this season.

Adomah, who was born in London but holds a Ghanaian as well as a British passport, has been a regular in the Ghana squad since making his debut against Brazil in a friendly in September 2012.

It has taken the attacker time to find consistently good form since being signed by Middlesbrough from Bristol City last August for a fee believed to be in the region of £1 million, but Karanka said the improvement in recent weeks has been marked.

"As an international he knows the team needs a little bit more from him, and I'm very happy with him because two or three weeks ago he wasn't good."

Karanka said it was possible the season-ending injury suffered by fellow midfielder Mustapha Carayol had made Adomah realise he needed to take more responsibility.

The Spaniard also had praise for young striker Luke Williams, who made a good impression after coming on as a late substitute against the Terriers.

"Luke asked for the ball, he played very well, and he showed me personality," Karanka said. "Sometimes when players go on for five minutes they say it is too short, they cannot do anything, but today in five minutes Luke showed me a lot of things."