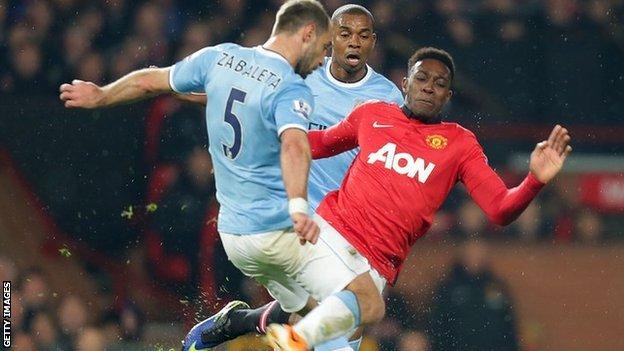 Manchester City defender Pablo Zabaleta says he was fortunate to come away from Tuesday night's Manchester derby at Old Trafford without serious injury.

The full-back claimed that a first-half tackle on him by Danny Welbeck, for which the Manchester United forward was booked, was "very dangerous".

"I was very lucky because I could have broken my leg," said the Argentine.

Zabaleta also claimed Marouane Fellaini was lucky to receive only a yellow card for an elbow on him.

"They were two bad challenges," the 29-year-old said after City's 3-0 victory.

"I saw them on TV in the dressing room. The first one was a very dangerous tackle by Welbeck,

"The second one was an elbow by Fellaini. It was also a red card but at the end of the day we should respect the referee's decision."