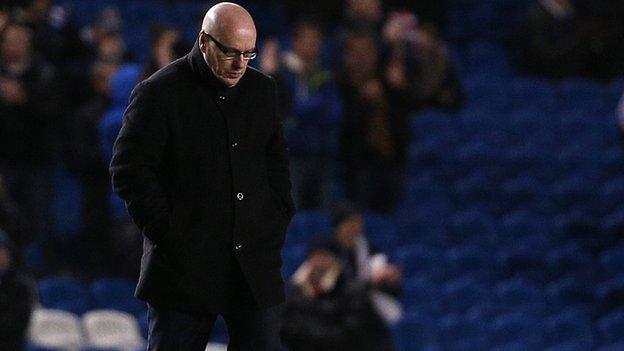 The Elland Road side suffered a 4-1 loss at Bournemouth on Tuesday, their fourth defeat in five matches.

The future of the club's ownership is unclear after the Football League blocked Massimo Cellino's takeover.

"We need to get the ownership of this club sorted out and get the right person in who has some clout," McDermott told BBC Radio Leeds.

"Let's not make excuses, we need to address what's happening on the pitch.

"There is no excuse for what happened in the first 15 or 20 minutes, but what is going on off-the-field does affect the players.

"All of the talk is about who is coming in and are we going to get paid and it has been going on now for quite a long time."

McDermott's side have now conceded 16 goals in their last five matches.

The former Reading boss was briefly sacked before being reinstated at the start of February and he said uncertainty about his own future may also be having an impact on the players.

"There's no doubt that since that situation happened some of the players' levels have dropped," he said.

Leeds host Yorkshire rivals Doncaster in their next fixture.