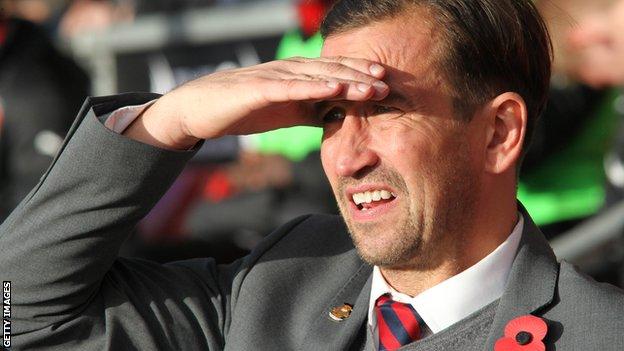 Newport County manager Justin Edinburgh has not given up on a League Two play-off place despite Tuesday's 0-0 draw with Bury.

It leaves the Exiles nine points off seventh-placed York with a game in hand, ahead of Saturday's home match with Portsmouth.

Edinburgh admits a top seven finish will be tough, but is still possible.

"We have to go on a run and we have got to get back to where we were up to the Christmas period," he said.

The draw against the struggling Shakers on Tuesday night was Newport's second consecutive clean sheet, but also means Edinburgh's men have failed to win in their last seven matches at Rodney Parade.

However, the former Tottenham defender hopes his side can build on the two results and push for a play-off place.

"The last two results have given us a platform," said Edinburgh.

"We are not conceding [goals]. We are not chasing games so you never know [we could make the play-offs].

"But I think first and foremost it's about Saturday's game and trying to maintain the run that we are on."