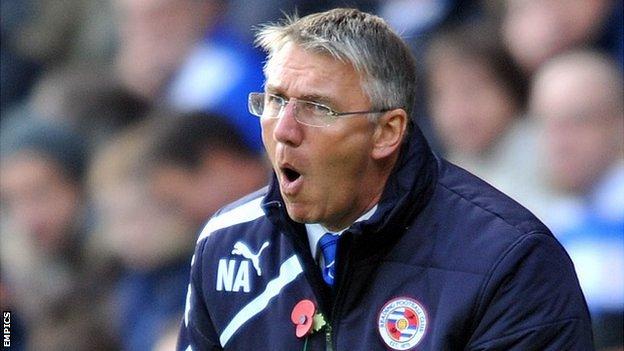 Reading boss Nigel Adkins has slammed his side's performance after they were beaten 3-1 by Championship strugglers Barnsley at the Madejski Stadium.

The result lifted Barnsley off the bottom as Reading missed the chance to further cement their play-off place.

"We were poor and nowhere near the level we can produce and know we have to be better," 49-year-old Adkins told BBC Radio Berkshire.

"We weren't good enough, and did not put two passes together."

The only positive for Reading was that Nottingham Forest and Brighton, the two teams that could have pushed them out of the play-off places, also lost.

"It just makes it even more annoying," added Adkins. "It is another team below us that we have not beaten at home. We've got to be brave enough to control and pass a football.

"We have a team full of internationals, but we have not got anywhere near the level we should do. I want a team who can control and pass a football and we have not done it. It is very frustrating."