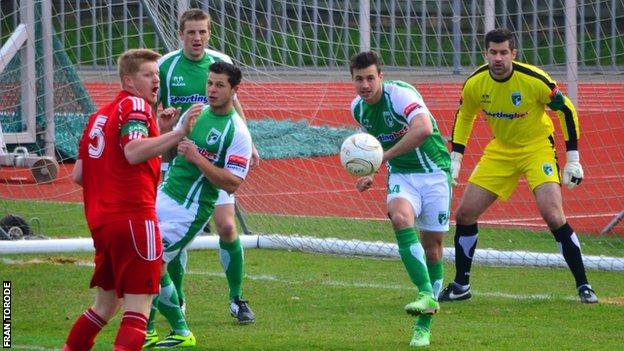 Guernsey FC's final home fixture of the season has been brought forward to avoid a clash with a rugby tournament.

The Green Lions share their Footes Lane ground, which is owned and run by the island's government, with Guernsey RFC.

The rugby club's youth teams are playing Jersey on 26 April, the same day as the final round of fixtures in Ryman League Division One South.

Guernsey will now play their final game, against Folkestone Invicta, on Friday 25 April at 19:45 BST.

"The clash of fixtures on 26 April was not ideal and going forward we will work even more closely with both Guernsey Rugby and Guernsey FC to ensure that this does not occur again," said a statement from the island's Culture and Leisure department.

Guernsey, along with the Ryman League and Folkestone, had considered moving the game to the UK as league rules meant they could not kick-off any later than 1500 BST on 26 April so no team has an advantage on the final day of the season.

"We have taken the view that we exist to take part in sport and do not wish to be seen to be gaining a potential technical advantage by adopting an unsporting attitude," said Folkestone chairman Mark Jenner in a statement on the club website.

Both are sides are looking to secure a place in the end-of-season play-offs, with Guernsey currently third in the league, one point ahead of fourth-placed Folkestone, who have a game in hand.