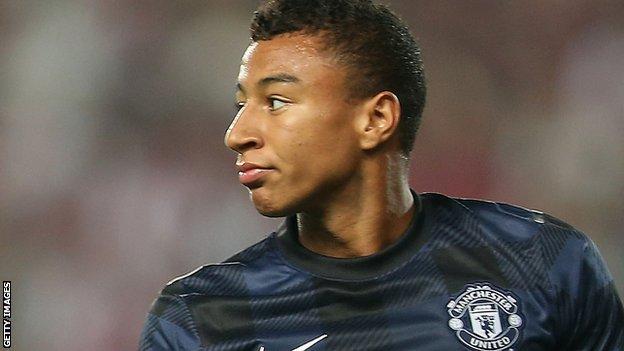 Lingard, 21, scored six goals while on loan at Birmingham earlier this season but has not found the net in his six appearances for Albion.

He endured a hugely frustrating night as the Seagulls were beaten 1-0 at Sheffield Wednesday, who scored an injury-time winner.

"I had one chance at the end - a shot which [Chris] Kirkland saved. I'm there or thereabouts and should be on the scoresheet soon.

"As long as we're creating chances and are in the right positions to put the ball away then nobody can moan, but it's just the final pass and the end product.

"It [scoring] is an added bonus for me. I'm not an out and out goalscorer. I like creating play and putting people through.

"I want to get my target, which is about eight goals - I've got six now - and I hope I reach that target by the end of the season."

The defeat at Hillsborough was a blow to Brighton's chances of reaching the play-offs.

Oscar Garcia's side are ninth in the table, three points behind sixth-placed Reading.

"It was disappointing. We dominated the game," said Lingard.

"We got the ball down well and created chances, and then they went and scored right at the end, which is a massive blow for us."