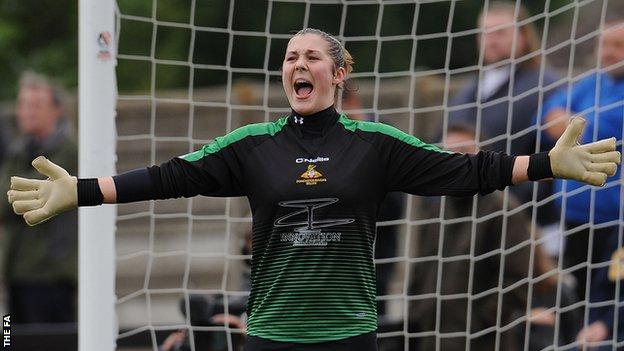 The 21-year-old has been with the Blues for a year, having previously had spells with Leicester City, Nottingham Forest and Doncaster Rover Belles.

The England Under-23 international comes in to replace Siobhan Chamberlain, who has joined Arsenal.

"I'm looking for game time and after speaking to the manager [Dave Edmondson] and training here, the vibe was really positive. I'm excited to come down and fit into that."

Earps, who is also a business student at Loughborough University, has been capped through the England age groups and was recently named in Mark Sampson's senior squad for the World Cup qualifier against Montenegro on 5 April.

She is set to deputise for Chamberlain, who is currently England's first-choice keeper.

"There's some brilliant players in the squad with a lot of experience," added Earps.

"I hope to be like a sponge and absorb as much as I can from the players, coaches and the environment. I want to bring that back to my club and put it into my performances."