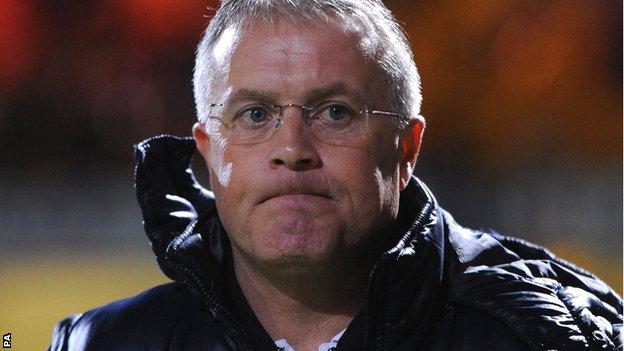 Port Vale boss Micky Adams is weighing up his future at the club in the wake of abuse from away fans after Tuesday night's 5-0 defeat at Bristol City.

"Some of the abuse afterwards was way over the top and I'll consider my future because of it," Adams said.

"I don't want to go into what was said but I'll think long and hard about where I go."

Adams continued to BBC Radio Stoke: "I think I've done a decent job for this football club, but I cannot accept what I've heard tonight.

"If my players had walked off the pitch without acknowledging the supporters, we would have been slaughtered. So I made sure we all go over there and thank them for their support, and still that's not good enough."

The issue of 52-year-old Adams's future has become of increasing concern in recent months at Vale Park as one of football's most experienced managers nears the end of his current contract, which is due to expire at the end of June.

"As I have said before, I will leave my future to the end of the season," added Adams, who led Vale to promotion from League Two just 11 months ago. "But certainly it is up in the air at the moment, the way I feel.

"I have been thinking about it loads - whether my course as manager of this football club has run its course, I don't know.

"If you go on the football circuit they say how well we have done - the real football people.

"That's not to say we haven't got knowledgeable football fans, because we have, but some of the abuse at the end there was way over the top."

On top of his side's five-goal thumping, Vale had one of their most senior players, defender Carl Dickinson, sent off.

"I was disappointed with Carl's sending off," added Adams. "The referee warned him once before, then he gets booked for dissent and sent off within a minute.

"I can't stick up for him that way, I am disappointed with his actions."