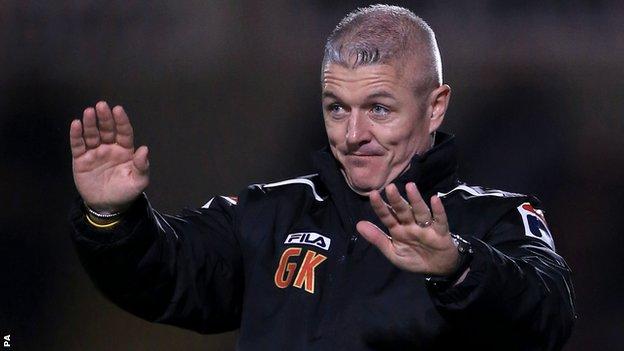 Carlisle manager Graham Kavanagh is hoping to make at least one loan signing before their next game.

Despite a much-improved performance, Kavanagh saw his side fail to convert any of numerous chances during the 0-0 draw against Shrewsbury on Tuesday.

We are looking closer to one loan deal, possibly two

The result left Carlisle in the relegation zone, but level on points with Tranmere a place above them.

"If I tried to explain how complicated it is you wouldn't believe me, but we are hoping they fall into place in next 48 hours."

Kavanagh was delighted with the effort of his players in trying to break down a stubborn Shrewsbury defence, but less so with the finishing, although Carlisle were unfortunate to hit the bar twice during the first half.

"The players gave their absolute maximum and we had enough chances to win two or three games," he said.

"We have to work more on our quality in front of goal. I understand the pressure, but we need a clinical edge and a clear mind."

With eight games remaining to preserve their League One status, Carlisle travel to Tranmere on Saturday for a match that could prove crucial to their fate.

"It looks as though it's going to go to the last game of the season, and the players have shown me they're up for the fight and it's do-able," added Kavanagh, who is also hoping several injured players, including defender Pascal Chimbonda, could be available for the trip to the Wirral.