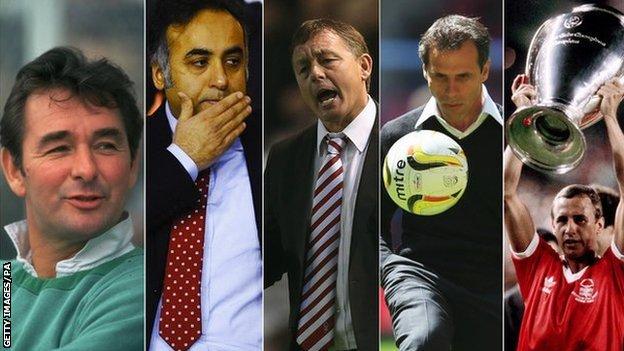 Talk to a Nottingham Forest fan and there's a fair chance that, within a couple of minutes, they will have mentioned Brian Clough and back-to-back European Cups.

It's perfectly understandable of course, given such an incredible achievement by such an iconic manager.

And although they are by no means alone in being quick to gloss over troubled times for the opportunity to reminisce, the latest discontent by the Trent means they are even more likely to bury themselves in the past.

The present feels all too raw.

"In many ways removing Billy Davies is not damaging because for many of us it feels better to have lost the baggage surrounding him. The way that the owner has managed it and communicated since is a worry. This feeling that Fawaz sees himself as a director of football with managerial experience could be a real problem.

"I am nervous about what happens next. I want a long-term view, I liked what Sean O'Driscoll was trying to achieve, but it feels at odds with what Fawaz wants. I think he wants to go up with himself central to it whereas I think he needs to step back and let better qualified people implement the strategy, with the key being building up areas like scouting, player development and team building."

Owner of Forest fans website Mist Rolling in from the Trent

They are managerless, out of form and haemorrhaging money. And with growing concerns about the owners and their competence, those concerns have given way to anger and, lately, even apathy - such is the disillusion.

Perhaps it's fitting that the man who has a key role in bringing back the good times is steeped in Forest history.

John McGovern, who lifted those European Cups in 1979 and 1980, has ended his summarising role with BBC Radio Nottingham to become a club ambassador and has a specific role in advising the owner and chairman.

If Fawaz Al Hasawi needed to build bridges with fans and restore faith, then appointing a former player with a deep love of the club seems a sensible starting point.

McGovern, 64, is well aware of the need to regain some stability following Billy Davies's sacking and will have a big say in appointing his fellow Scot's successor.

"We want to get a new manager as quickly as possible," McGovern told BBC Sport. "Although we have slipped out of the play-offs, we are still in the frame and a couple of wins we could be back up there.

"But good managers who are available are scarce and, just like when it comes to signing players, we cannot panic buy.

"We have to be a little bit careful because we have to get the right manager regardless of the length of the contract. Getting someone in for just eight games may not be answer and that could be tricky anyway.

"Some don't want a short-term deal and some are on gardening leave on good money and in no rush to get back in the game.

"We need to make sure we get the right man."

That man won't be Neil Warnock, who has already turned down a short-term deal because he is clearly fearful of interference from above, worried by the structure behind the scenes, and the lack of knowledge of the English game within the club.

And it won't be Reds legend Stuart Pearce, the former England Under-21 boss having rejected a City Ground return for family reasons.

From the outside the club looks a mess. On the pitch Davies was sacked following an eight-game winless run which has left their season in danger of imploding.

Poor form aside, there are big - and mounting - debts because of huge wages and the looming impact of Financial Fair Play.

There are wealthy, trigger-happy owners, who are already seeking their fifth permanent manager in less than two years, and whose grasp of the English game is seemingly at best naive and, at worst, clueless - depending on your viewpoint.

And all this set against a backdrop of an unsettled atmosphere, which has grown as large sections of the media became alienated under the Davies regime.

"It's not that I was completely in support of the manager, more that I am just not a fan of booting managers out. We were only two points outside the play-offs and had we won on Tuesday [against Charlton], we would be in the play-offs. I think he should have been given the time to see the task through until the end of the season, but the off-pitch antics were too much for some.

"It was inevitable Billy would be sacked in the end. He seemed to decide to have a certain mentality and approach with blocking the press and he was asking for trouble. We have had some great results this season but losing 5-0 to Derby was the final straw. He should have come out an addressed the fans after that."

Supporters were becoming increasingly angered by the off-field news dominating the playing side. And as results dropped off, the attention to the media ban and lack of information escalated. The tolerance stopped as the team teetered.

Just when the Reds needed a boost, they were battered 5-0 by Derby County - the result that ended Davies's second spell in charge.

They followed that up with a 1-0 home loss against lowly Charlton Athletic and are now looking an outside bet to make the play-offs.

Al Hasawi, whose love for Forest grew from the Clough sides of the late 70s and early 80s, has denied interfering in team matters and apologised for the turmoil.

But the apology has seemingly done little to appease and reassure the fans.

Forest supporters have been lining up to say recent results and the off-pitch problems meant it was time for Davies to go.

Steve Wright, owner of Forest fans website Mist Rolling in from the Trent, said: "In many ways removing Billy Davies is not damaging because, for many of us, it feels better to have lost the baggage surrounding him.

"I was delighted to see Davies go but nervous about what happens next. I want a long-term view."

"Many fans, for a while at least, argued that it didn't matter what was going on off the pitch; it was only results that mattered. In the short term this might have been true but it would only last as long as the unbeaten run. As it is, the structure of the club has been undone and we're now paying the price. The relationship with the press and the club's reputation are hugely important.

"There was a surreal sense of relief when Davies was sacked. Having expected him to be here until 2017, as he kept insisting, and acknowledged that, maybe despite everything, he might get us promoted. We played some great football at the start of the year but the same problems surfaced again. It's difficult to know where we turn - without any strong, experienced senior executives we have no serious drive or direction."

Pat Riddell, owner of Forest fans blog Seat Pitch, agreed that sacking Davies was the right thing - even if the timing is far from ideal.

"Many fans, for a while at least, argued that it didn't matter what was going on off the pitch; it was only results that mattered.

"In the short term, while we were winning, this might have been true but it would only last as long as the unbeaten run.

"The structure of the club has been undone and we're now paying the price."

For some it seems to be a case of "be careful what you wish for". The irascible Scot was a man whom many supporters consistently called to be reinstated during the traumatic 2012-13 season.

Few have questioned Davies's managerial credentials, but there are misgivings about the "baggage" and disruption has grown.

"I think he should have been given the time to see the task through until the end of the season, but the off-pitch antics were too much for some," March said.

"It was inevitable Billy would be sacked in the end. He seemed to decide to have a certain mentality and approach with blocking the press and he was asking for trouble.

"That upset many fans and when the results started to get worse the rumblings from supporters got louder."

Whoever takes over will seem to have a big task to get things right off the pitch, as well as on it.

But the obvious doom and gloom aside, there are reasons to be cheerful.

Forest still have serious financial clout from owners who maintain they are unwavering in the dream of bringing Premier League football back to Nottingham for the first time since 1999.

And despite concerns about interference from above, there there will no doubt be an impressive list of candidates clamouring for the job.

Warnock believes Zola - given his previous experience working at Watford - would be a ideal man to work with Al Hasawi.

"I can see someone like Zola coming in," Warnock told BBC Radio Nottingham.

"We need a long-term plan, and if we lose a manager we should be able to recruit a replacement without a wholesale shift in personnel on the pitch and among the coaching staff. I would much rather us limp home this season and get a structure to support Fawaz's vision of promotion then sustainability in the top flight than make a knee-jerk appointment and be in the same position as now in a year or less."

"At Watford he had a great first season when the owners brought loads of players in and Zola coached them. That might fit the bill that the chairman is looking for. But that isn't how I manage."

Former England, Chelsea and Tottenham manager Hoddle has the pedigree and vast knowledge, while Mackay has had considerable experience of working under a challenging chairman.

But whoever is appointed, he is unlikely to be given the luxury of time.

Al Hasawi talked about his desire to have Davies as his manager in a Sir Alex Ferguson-style, Manchester United-like dynasty. Davies only signed a new, extended contract in October.

That relationship broke down rapidly.

Money appears no object in seeking a new love. But patience could well be more of an issue - both in terms of backing the new manager during the rebuilding phase, and keeping faith with "project Premier League" and all the hassle that involves, while the criticism from a set of frustrated fans increases.