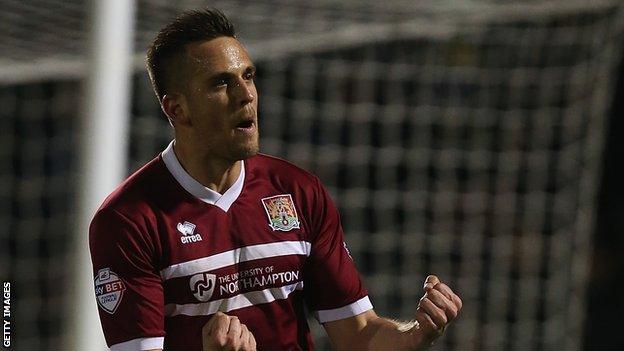 Northampton Town midfielder Darren Carter has said his side will determine their own destiny in the League Two relegation fight.

The Cobblers, 23rd in the table, must still face four of the five teams directly above them.

"We know we have to play Bury, Portsmouth, Wycombe and Accrington," Carter told BBC Radio Northampton.

"They're cup finals. It's in our hands, that's all we want. We've got to stand up and be counted in those games."

Six points separate Accrington in 16th and Northampton, who occupy the final relegation berth, with Bury, Bristol Rovers, Wycombe and Portsmouth in between them.

Chris Wilder's side missed an opportunity to secure three points on Tuesday night, conceding an injury-time equaliser against AFC Wimbledon.

But they could move to within a point of Bury on Saturday, should they beat the Shakers at Sixfields.

"Bury is massive for us. If results go our way and we win we could be out of the bottom two. We've got to stay positive," said Carter, who scored both of Northampton's goals against Wimbledon.