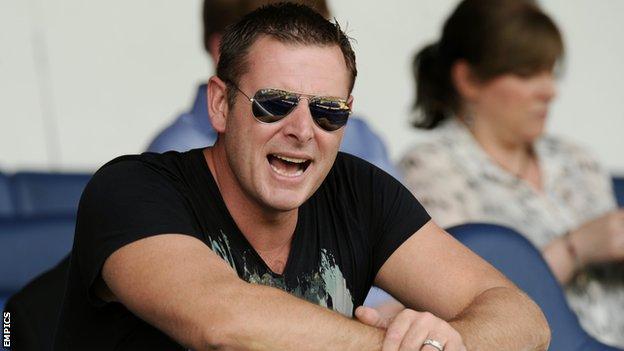 When an Irish, self-made millionaire became Peterborough United chairman eight years ago, the corridors of London Road became as blue as their kit.

With a penchant for strong language, a commanding physical presence, and a shoot-from-the-hip swagger, Darragh MacAnthony can often be loved and loathed in equal measure.

"To be not liked by a lot of people in football, I couldn't care less," he told BBC Sport.

"It fuels me and my club to be different. I'm a rebel who wants to change things in football.

"When I came into real estate it was a closed shop. People were telling me to forget about it, 'you've got no chance'.

"When I bought Peterborough United and said we're going to get out of League Two and League One, all the usual people were laughing and sneering at us.

All told, the past eight years, the MacAnthony era, have taken in League Two, League One and the Championship - four promotion chases, three relegation battles.

A year on and the drama fails to subside. A battle to stay in the League One play-offs is coupled with a trip to Wembley for the Johnstone's Paint Trophy final on Sunday. It is never dull.

"It's like my life in a way. It's what I expect. I wake up and never expect a normal, boring day," said MacAnthony, speaking from his Florida home.

Born in Dublin, MacAnthony spent his formative years living in Spain with his family.

A prosperous period developing property abroad saw his worth peak at £150m in 2007.

A Liverpool supporter and football fanatic, MacAnthony needed an outlet.

With then owner and current director of football Barry Fry looking to sell Posh in 2006, MacAnthony took the reins of the League Two club and, with it, all of the debt, before officially taking full ownership a year later.

He became the youngest owner of an English club.

"There are quite a few chairman who look down their nose at me and think 'who is this young whippersnapper, who does he think he is?' It's a bit of the old-school mentality.

"Here I am, a 29-year-old Irish property developer, coming in like I own the place, looking a million dollars. It's tough for some of them to take that.

"Some of them are not into change. I'd like to be involved with the Football League more, but I have enough on my plate.

"There are a lot of cowards who talk a good game but won't vote and change it. There needs to be a little more youth within the Football League and on committees.

"We need to stamp out some of the stuff the Premier League shoves down our throats. We need to stand up and be stronger."

"I decided to have fun. When I bought the club I was a complete workaholic," he said.

"I flew over, walked out on to the pitch. I loved it and wanted it.

"Do I worry about what fans think of me coming in and playing around with their club as a hobby? No, not really. I'm as good as my word."

As far as hobbies go, it is not exactly stamp collecting.

It has cost MacAnthony £12m, give or take a few million.

"Maybe a little bit more. I've lost track. I've got some of it back. Not all of it. But over time I will get all of it back," he said.

"For the money I've put in, I've enjoyed every minute of it. It's paid for the enjoyment and I hope the fans have enjoyed it too.

"If you love football, love taking risks - the thrills and the highs, the adrenaline of winning. I don't think there's a better way, as a wealthy person, to enjoy your money.

"I've had a few run-ins in board rooms over the fact I don't wear ties. What they fail to understand is I spend my life in a tie. It's not my work, it's my bit of fun."

A hands-on man, Posh became his solace, a constant, particularly when the financial crisis, which was at its most destructive in 2008, threatened to tear down everything else around him.

While MacAnthony was losing money, under boss Darren Ferguson, Posh were winning games and back-to-back promotions that took them to the Championship.

Right now, his side have lost five of their last seven matches and are clinging on to a top-six place in League One.

"The 29-year-old version of me would punish you if you angered me.

"But you'd still work for me and over time you'd know I was punishing you and that could sometimes last a year or two.

"I had a guy who worked for me and my mother died and he upset me by saying something about my mother, which he didn't mean.

"But I sent him to a different country from where his family was and he was there for 15 months.

"I suppose you can call me heartless for that."

"I bought a football club at 29. I was at the peak of my power business-wise, making a lot of money. For me it was the ultimate buzz," he recalled.

"The world collapsed in 2008, 2009. That was the biggest nightmare for me while my businesses were going down the toilet. But the football club probably kept me sane through that.

"But now my team are a bit Jekyll and Hyde. One minute I want to hug them, the next I want to strangle them.

"The highs are always worth it, not so much the lows. I'm definitely improving. I sometimes wish my players hurt as much as I do. Sometimes they don't."

Ferguson remains the only manager to really be able to deliver for MacAnthony.

Across his two spells, the Scot has come good on three promotions, two of those from League One.

"We're very close. I've got his back. He's got mine," said MacAnthony.

"When we lost 13 of the first 17 Championship games last season, 99% of chairman would have given him the bullet.

"This year, the mandate was to win the league and the JPT. We spent £3m on transfer fees this year. Any other chairman would have fired him by now for being in sixth place."

Promotion of course is still very much possible, albeit through the play-offs.

But the issue of lifting the Johnstone's Paint Trophy becomes very genuine on Sunday, when Peterborough face Chesterfield in the final at Wembley.

It is a competition that is often dismissed as irrelevant, sometimes an inconvenience.

"For me it's simple. We've got the FA Cup of the lower leagues. Why wouldn't you want to win that? And you can earn up to £500,000 - that could be another six players the following year."

Posh expect to take in excess of 18,000 supporters to the capital, three times as many as regularly attend London Road.

It remains a mystery to MacAnthony why a city with a population of 200,000 people struggles to get behind its football team.

He admits, when he arrived eight years ago, that he bought into the Field of Dreams mentality. He built success, but they did not come.

"Probably my biggest mistake was thinking that," he said.

"If I can get us back to the Championship, keep us there for three or four years, I can get us over 10,000. Then we can kick on as a city.

"Peterborough getting into the Premier League would allow us to kick on for the next 50 years."

If progress was measured by sheer force of character alone, MacAnthony's Posh would be World Cup winners in 2018. It would be a brave man who tells the bolshie Irishman that not everything is possible.