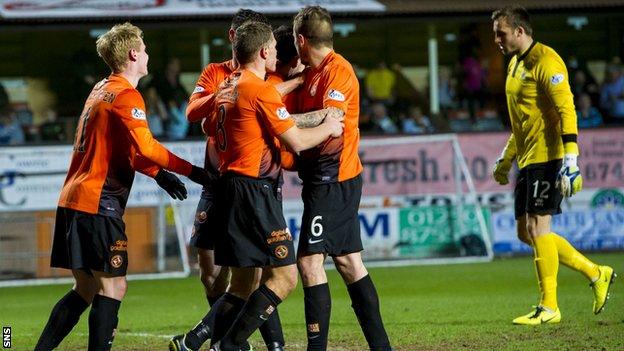 Jackie McNamara admitted Dundee United can play a lot better after they narrowed the gap on second place with a 2-1 win over Inverness Caley Thistle.

Ryan Gauld finished off a sweeping move to give them the lead, then Ryan Dow took advantage of a howler from goalkeeper Dean Brill to add a second.

Liam Polworth pulled one back to set up a nervy finish for the Tannadice men, but they saw off the late fight-back.

"There wasn't a lot of quality," said McNamara. "We can play a lot better."

It was United's third win in a row and the Tannadice side can move two points behind Aberdeen when they face their New Firm rivals at Pittodrie on Saturday.

I thought we were comfortable without playing well

"That's a couple of games we've not played well and won," McNamara told BBC Scotland. "We upped the tempo at times, but I don't think we had a lot of fluency in the game at the right moments.

"We were a bit nervy when the lad scored that goal to get them back into it. That gave them a real lift at that time because I thought we were comfortable without playing well.

"We're on a decent run at the moment. We've got a tough game and a couple of big players out for us with young Andrew Robertson and Nadir Ciftci suspended.

"But it should be a good game and a good crowd up at Pittodrie."

The second goal from Dow clinched the game when Brill blasted Josh Meekings' short pass-back off the striker.

McNamara was adamant his player deserved credit for the goal despite the ease with which it was scored.

"It was fortunate, but you've got to give Ryan credit for the desire to go and chase it down," he said. "He never gave up.

"Sometimes a striker will give up at that moment, but he got the rewards for it."