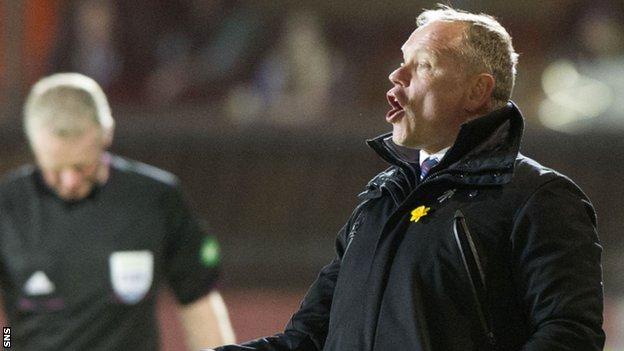 Inverness manager John Hughes felt another self-inflicted mistake cost his side as their Europa League hopes were dealt a blow in a 2-1 defeat by Dundee United at Tannadice.

Liam Polworth scored late on, but it was too little too late.

"We put so much into the game," said Hughes. "I feel for the guys, but it is football we're playing."

After Gauld had finished a sweeping United move to put the home side in front, Brill made a hash of Josh Meekings' short pass-back, blasting it off Dow, who only had to tap the ball into the empty net.

I felt we were a match tonight for Dundee United in terms of playing football, but once again self inflicted mistakes cost us

"The second goal, it's self inflicted once again," Hughes told BBC Scotland. "They seem to be doing that, they have that destruction button. It's something that you can't legislate for.

"In terms of getting on the ball, being in the game and passing it, I thought we were very good. The shape was very good.

"We could have got a bit more support to Billy at times, but we don't half make it hard for ourselves.

"You have to control it, pass it and take the responsibility of getting on the ball. You cannot hide. We do it every day in training and you have to find a mindset when you go on that football pitch.

"It's a mixture of everything; wearing your heart on your sleeve, getting stuck in, making sure you're winning your one-on-one battles. You shouldn't have to ask for that, that's a given.

"I felt we were a match tonight for Dundee United in terms of playing football, but once again self-inflicted mistakes cost us.

"We've got that wee lack of concentration where we self-implode. We have to get rid of that, the concentration levels have to be better."

Inverness have played six games in the past 18 days, including the Scottish League Cup final.

The Caley Thistle manager admits the schedule has taken its toll on his players.

"I'm reluctant to make an excuse," he said. "On the back of the Cup final, our programme has been really heavy.

"Too much water kills the plant and we keep telling the boys to go back to the well and they've done absolutely fantastic.

"I just felt tonight there was a little bit of fatigue, but we'll dress them up and get them ready to go again."