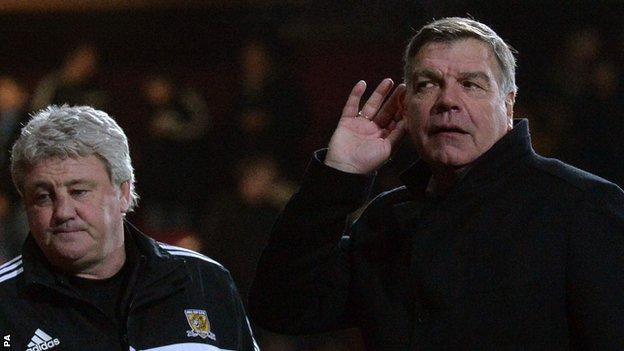 Manager Sam Allardyce has criticised West Ham supporters for booing his side after their 2-1 Premier League win over Hull City on Wednesday.

The Hammers played against 10 men for more than an hour - but failed to dominate, frustrating some home fans.

"I've never been in a place where I've won and got booed," said Allardyce, 59. "Fans affect players.

"We don't need them on players' backs when we are coming off three defeats. They have to stay and help them win."

He added: "At half-time, the players were talking more about fans booing them than the game. I had to make sure they kept focused on the field.

"There are a lot of arguments about the way Sam Allardyce plays his football. West Ham need to realise where they are and what they are.

"I think West Ham have become one-dimensional because of the nervousness that is spilling on to the pitch."

West Ham, who won the game through James Chester's own goal in the second half, had a man advantage after Hull goalkeeper Allan McGregor brought down Mohamed Diame in the box.

Referee Mike Dean appeared to allow play to continue, but after taking instruction from his assistant Scott Ledger, he awarded a penalty and sent off the keeper, before Mark Noble scored from the spot.

"I want the players to play better and take advantage more - but you don't at this level," added Allardyce, whose side are nine points clear of the relegation zone.

"People are organised, wait for an opportunity to suck you in and expose you, even with 10 men. It's a huge, huge three points for us."

Back to winning ways

Prior to their win over Hull, West Ham had lost three successive top-flight games for the first time under Sam Allardyce.

Allardyce joined West Ham in June 2011 and guided them to promotion from the Championship before securing a 10th-place finish in the Premier League in the 2012-13 season.

His side have won four of their last five home matches but are four points short of the 38 he believes will secure Premier League survival this season.

West Ham captain Kevin Nolan said: "Sam has taken a lot of flak here. It is very surprising - but people have their opinions and you have to take it on the chin.

"He keeps teams up. When you give him the chance, he builds a strong team. He doesn't get the credit he deserves. He doesn't just keep teams up - he builds good squads."