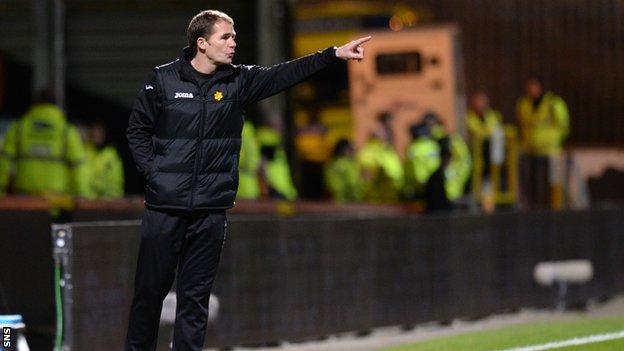 Partick Thistle manager Alan Archibald felt they handed Celtic the initiative too easily as they lost 5-1 at Firhill.

Celtic scored minutes into the game through Stokes and did the same again at the beginning of the second-half.

"We let them in the game," he said. "We let Anthony Stokes get a header from six yards out after two minutes and I think it killed us.

"It took the wind out of our sails. It took us a while to get back in the game.

"We got back in, started to play a wee bit for 20 minutes of the first half and then we give them a goal at the start of the second half and it kills you.

Thistle remain in 10th position, two points ahead of St Mirren in the relegation play-off place.

Archibald is confident his men can get back to winning ways if they cut out the mistakes that allowed Celtic to rack up the goals.

"Probably the worst thing that happened to us was getting the goal to make it 3-1," he said.

"Then, for some reason, we started to go try and chase the game and left spaces in behind. They had pace to burn at that point.

"Anything we took tonight was a bonus, no doubt about that. And our fight starts now on Saturday against St Johnstone.

"We said to the boys when the game goes to 3-1 'don't make mistakes, don't let them mistakes creep into your game'.

"As long as we don't do that on Saturday, we'll be fine."