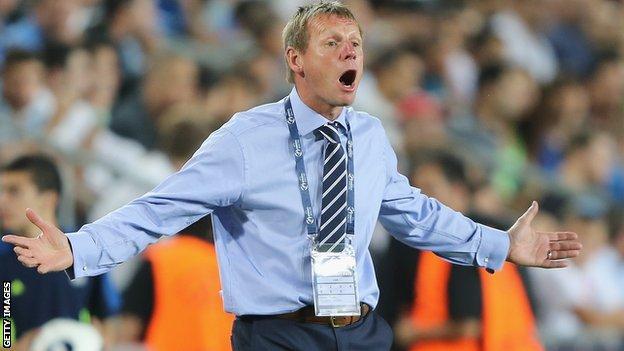 Nottingham Forest legend Stuart Pearce has ruled himself out of the running for the manager's job for family reasons, BBC Radio Nottingham reports.

Pearce, 51, was a hugely popular figure among fans during 12 years as a Forest player, but has rejected the chance to replace Billy Davies after initial talks with owner Fawaz Al Hasawi.

Pearce spent 12 years at Forest where his trademark crunching tackles earned him the nickname "Psycho". His playing days ended in 1997 after a brief stint as caretaker player-boss.

He played for Newcastle United, West Ham and Manchester City after leaving Forest and was Manchester City manager for two years from 2005 before taking over as England Under-21 boss in 2007 - a job he held until June 2013.

Former England Under-21 boss Pearce had emerged as the preferred choice.

Ex-West Ham manager Zola, 47, resigned as head coach of Watford with the club in 13th place in December, having led them to the Championship play-off final last season.

It has been almost eight years since former England boss Hoddle, 56, last had a job in management, when he was in charge of Wolverhampton Wanderers.

Mackay, 42, was controversially sacked as Cardiff City boss in December, having seven months earlier overseen their promotion to the top flight for the first time since 1962.

Neil Warnock has already rejected the chance to take over as manager.

Forest are seventh in the Championship, two points outside the play-off places following a nine-game winless run, with eight games of the season remaining.