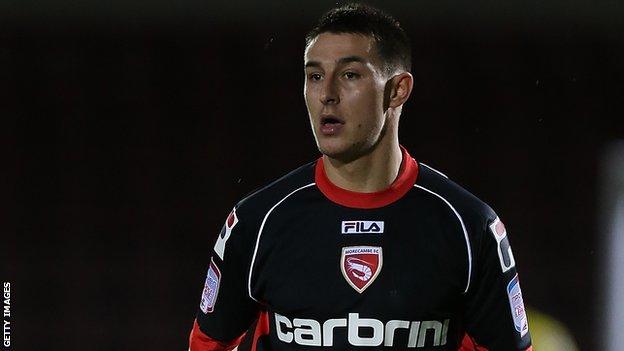 Wigan's Jordan Mustoe has returned to Morecambe on loan following a spell with the League Two club last season.

The 23-year-old left-back played 12 times in all competitions for the Shrimps last term, scoring once.

Mustoe, who has had further loans at Bury and Wycombe this season, has made four appearances at senior level for Wigan, all of them in the FA Cup.

Manchester United's teenage defender Liam Grimshaw has also joined Morecambe until the end of the season.

The pair link up with Jim Bentley's side in time to face Bristol Rovers at the Memorial Stadium on Saturday.

"We all know what Jordan is about," Bentley told the club website. "He has been here before and had a good spell. He knows all about us and how we play and he will be a very useful addition to the squad.

"Liam is highly regarded and has a fantastic attitude. I am delighted that we will have him with us for the rest of the campaign."