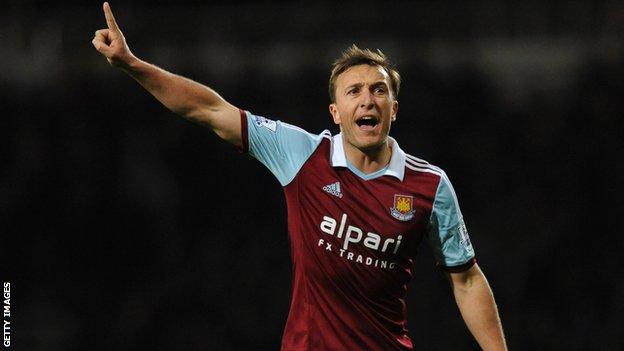 West Ham's Mark Noble has pleaded with the fans who booed his side during their win over Hull to back the team.

Sections of the Upton Park crowd jeered at half-time and full-time as the Hammers struggled to beat their opponents' 10 men.

Noble scored the first goal of the 2-1 win from a penalty after Hull goalkeeper Allan McGregor was sent off.

"I must admit the anxiety from the stands can spill on to the pitch and get into our minds," said Noble.

"When that happens, some players can be affected and they make mistakes that they would not normally make. I think you could see that in our performance last night," the midfielder added on the club's website.

"I would ask that you give your backing to the boys because I can tell you that we are giving 100% for the shirt and 100% for West Ham United."

Hammers manager Sam Allardyce cupped his hand to his ear in response to the booing following the final whistle, and subsequently criticised those West Ham supporters who had aired their frustrations.

Noble admitted that his side had not been at their most fluent, saying: "I appreciate that we did not play our best football and that, at times, it wasn't pretty.

"But sometimes it just doesn't happen for you as a team and as individuals, no matter how hard you try.

"We know that you have spent your hard-earned money to watch us and we desperately want to put a show on for you in every game.

"Together we are stronger, so let's stick together and make sure we get as many points as possible from our last seven games."

West Ham are 11th in the Premier League with 34 points from 31 games.