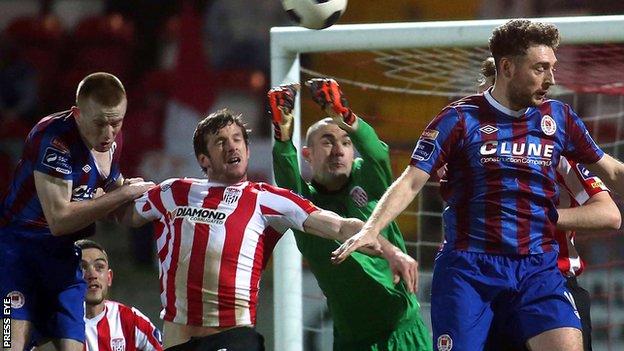 Roddy Collins is still waiting for his first win as Derry City manager following Friday's stalemate against St Pat's Athletic at the Brandywell.

The Dublin side had the better of the first half and claimed they should have had a penalty for Ryan McBride's early challenge on Christy Fagan.

Derry pressed late in the game with Rory Patterson lifting a shot over.

Then full-back Dean Jarvis headed wide after getting on the end of a Danny Ventre's free-kick into the area.

Earlier, Chris Forrester of St Pat's had a shot parried by home keeper Gerard Doherty and the follow-up was deflected over.

The result leaves Derry with three points from a possible 12 and they have just one point from their first two home fixtures.

Collins had brought in a string of new players for the 2014 campaign, warning they would take time to settle in as a team.

Shamrock Rovers and Cork City are joint leaders in the Premier Division with 10 points from four games.