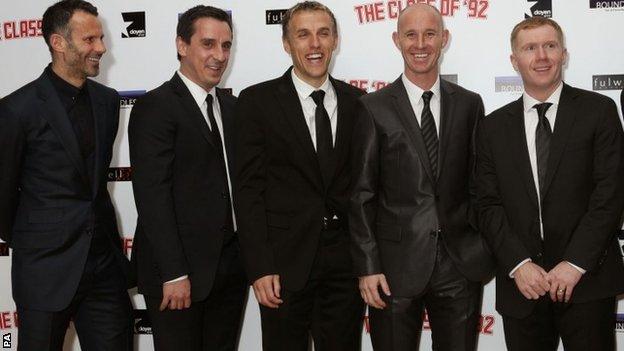 Giggs, in his 24th season as a player at Old Trafford, is joined in the venture by the Neville brothers, Gary and Phil, Paul Scholes and Nicky Butt.

United player-coach Giggs, 40, said: "We want to use our football experience and knowledge to nurture young talent."

Subject to Football Association and Northern Premier League approval, the deal will be completed in the summer.

Salford are 11th in the Northern Premier League Division One North, the eighth tier of English league football.

Gary Neville, who had his first United trial in Salford, said: "Salford City represents those early years, the commitment, hunger, enthusiasm, desire and spirit of football and I am very excited about this venture."

The former England defender added on Twitter: "For clarity, [there will be] no name change, no ground change and management and committee as before!"

His younger brother Phil, now United's first-team coach, added: "It is important to safeguard the hard work that is done in the lower leagues and it is going to be exciting to be able to feed our experience into the young players."

Giggs, who made his 961st appearance for United in the 3-0 victory over Olympiakos on 19 March, is the only one of the six United youth-team graduates who came to be known as the Class of '92. still playing.

Along with former England captain David Beckham, Giggs, Scholes, Butt and the Neville brothers were part of one of the most successful periods in the club's history, having made their senior debuts in the early 1990s.

Scholes, who was born in Salford, said: "We know it will be tough but we will be committed to this from the start and have some very exciting plans going forward."

Club chairman Karen Baird said the agreement would give the club "a very bright future".