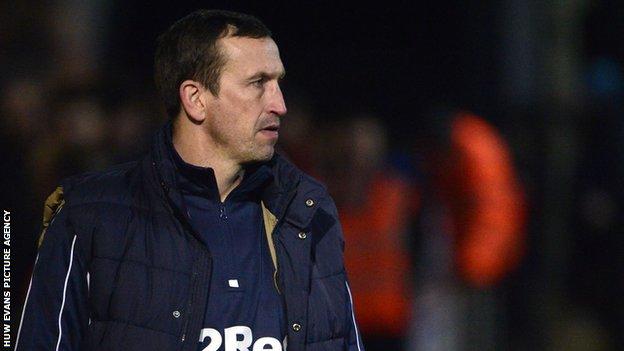 Newport County manager Justin Edinburgh insists he has no interest in succeeding the sacked Richie Barker at Portsmouth.

On Saturday County host Portsmouth, who won four of their matches under Barker and have dropped to only two points above the relegation zone.

"If I didn't go then I certainly wouldn't be going now," Edinburgh said.

"There's an enormous amount of work to be done here. In my two and a half years there's been unbelievable strides made on and off the pitch.

"We continue to do that and we want to keep the progression going.

Every club does what they feel is right for themselves. I'm only looking from the outside and find it quite a strange one.

"Over the last month or two we've really learnt a lot about ourselves as a football club and we've moved on."

Academy boss Andy Awford will be in temporary charge of Portsmouth for Saturday's game against County at Rodney Parade.

Edinburgh has questioned the decision to sack Barker after just 20 games in charge.

"But I suppose being in football as long as I have now and the way that it's going it probably shouldn't surprise me."

"Every club does what they feel is right for themselves. I'm only looking from the outside and find it quite a strange one.

"Obviously they feel it's the right decision for themselves.

"I suppose they'll be looking for a reaction from the players from the dismissal of the manager.

"All of our games between now and the end of the season are going to be very, very tough encounters.

"Everyone's fighting for points for different reasons and I expect a tough encounter."

Newport go into the game unbeaten in two games and nine points off the League Two play-of places.