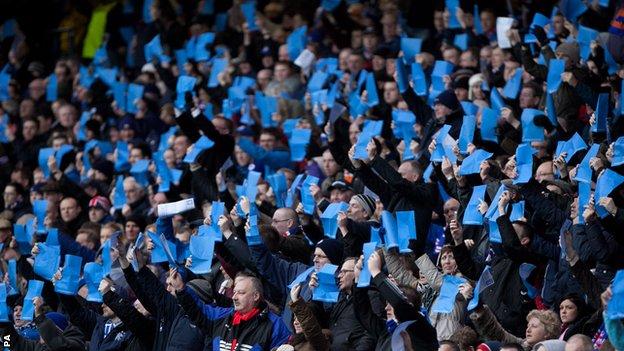 Questions arise, too, since the chief executive, Graham Wallace, declared at the annual meeting in December that there were "sufficient funds to trade on as we normally do" in the "near term".

The interim figures, though, do not explain why the directors had to seek a £1.5m loan to carry the business through to season ticket renewal time.

The headline numbers are clear: the operating loss has fallen from £7m in the comparative (seven-month) period last year to £3.6m (for the six months to 31 December 2013).

This represents progress, albeit from an unsustainable position, with improved retail profits of £1.5m, a reduction in staff costs of £1.3m, other cost reductions of £1.2m, and is offset by £500,000 in severance payments.

The balance sheet up to 31 December showed cash in the bank of £3.5m, although £1.7m of this relates to Rangers Retail Limited, the joint venture with Sports Direct, and so wasn't available for working capital.

Out with the rise in revenues from Rangers Retail Ltd, which also came with associated costs, other income streams essentially remained flat. Overall, revenues rose from £9.5m to £13.2m.

Some cost reductions improved the financial picture, but the operating expenses rose slightly from the comparative period last year. In effect, under the former chief executive Craig Mather, there wasn't enough action taken to reduce costs, but uncertainty remains.

Some are flagged up in the accounts, but questions still exist at a time when fans are considering what to do with their season ticket renewal money.

As well as his statement at the AGM, Wallace said in an interview on 21 January: "Come April, we'd be confident that the club will have sufficient cash in the bank in order to maintain our operations."

So why was a £1.5m loan sought last month, at costs that reflect a high risk to the lenders?

In the accompanying notes to the interim results, the chairman, David Somers, acknowledged that the loan was required because the club was unable to secure asset finance or banking facilities, but these had not previously been referred to by Wallace when he assured that there were no cash flow problems.

As well as the need for short-term, and expensive, external funding, the interims also highlight future uncertainty. There is a "material concern" about the ability of the business to continue as a going concern due to the season ticket trust fund that the Union of Fans is setting up.

Season ticket renewals remain the largest and most significant revenue stream and going concern status was only granted on the basis that the directors were confident that the timing of season ticket income, the volume of sales and the pricing would be in line with historical figures.

"This clearly would not be in the best interests of Rangers," said Somers.

"This possibility results in the existence of a material uncertainty which may cast doubt on Rangers' ability to continue as a going concern."

In effect, the chairman is urging supporters not to put their renewal money aside. Fans, though, believe that they are entitled to seek certain assurances about the future running of the club and security over the two main property assets, Ibrox and Murray Park, in return for releasing the renewal money.

It would be a high-stakes impasse, although supporters who back the UoF point to the terms granted to Laxey Partners - a £150,000 premium and security over the Albion car park and Edmiston House - for their £1m contribution to the £1.5m loan.

That amount is now being provided by George Letham, a Rangers supporter, on better terms, while Sandy Easdale's £500,000 contribution is also secured against the Albion and Edmiston House.

There is then a dual threat, since any significant impact on revenues would hamper the ability to pay back the £1.5m loan from Easdale and Letham, which is due to be paid back by 1 September, and so will come from the first tranche of season ticket income.

The two sides can state their case, but the reality is merely confirmation of the scenario highlighted by Dave King, the former Rangers director: either drastic cost-cutting or external investment is required to stabilise the business.

King wants to take part in a fresh share issue, to provide investment funds that will better equip the club to rise back to the top flight and challenge Celtic for the title.

Wallace, though, said in the notes to the interim figures that it would be the end of April before the board reveals its business plan, later than the 30-day deadline sent by King last month and later than the 120 days he asked for at the AGM.

King has urged supporters to wait until they have seen the business review before deciding on whether or not to renew their season tickets. Rangers are in a better place financially than they were but still not in a good place.

Action is required and there are two different approaches. Those currently in charge want to retain their control; King would want command of any funds he puts into the club.

This is the real impasse that exists and the interim results merely highlight the financial backdrop and how critical the situation might become.