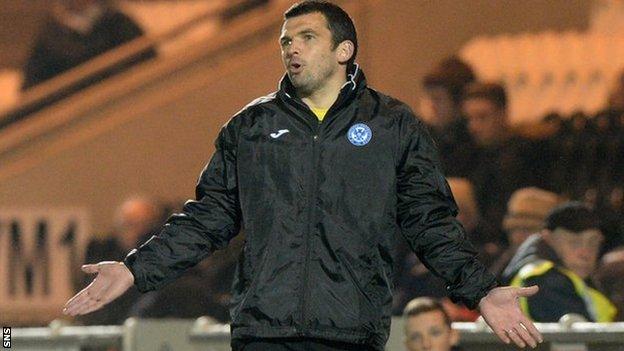 Callum Davidson will hand the managerial reins back to Tommy Wright on Saturday having won both games while the Northern Irishman was in hospital.

"Tommy's out of hospital and is getting wound up about things again, so he's back to normal," said Davidson, whose side defeated Hibernian and St Mirren.

"He will be back in training on Friday and I imagine he will probably be back at the game on Saturday."

I just stood on the sidelines talking rubbish.

Assistant Davidson was not sure whether Wright would be fit enough to be at pitch side as Saints entertain Partick Thistle.

"Whether it's in the dugout or the stand, he will be doing the team selection and the talk," said the former Scotland full-back.

Davidson, who had revealed earlier in the week that Wright had been sending instruction via text from his hospital bed, had relished his spell in charge along with coach Alex Cleland.

"It's been good," added Davidson. "I just stood on the sidelines talking rubbish.

"But I have enjoyed it, it's great experience and I have learned a lot from my little stint. But it was all Tommy's work."