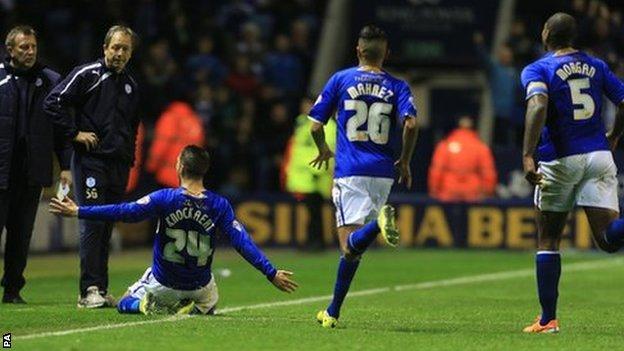 Leicester City are on the brink of a Premier League return after stretching their unbeaten run to 21 games with victory over Sheffield Wednesday.

Leicester grabbed the lead when striker Riyad Mahrez fired across keeper Chris Kirkland from the edge of the box.

Leicester will secure promotion to the top flight for the first time in a decade if third-placed QPR lose at Bournemouth and Derby County fail to win at Middlesbrough on Saturday.

Knockaert wasted a decent chance early on when he fired wide from 12 yards after good work down the left by David Nugent.

But the home side were in front when Mahrez scored his third goal since joining from Le Havre in January, cutting inside his marker and curling a left-foot shot into the net.

Knockaert also bent a 20-yard shot just over the bar while Nugent was inches wide with a low effort in an entertaining first half.

Wednesday created chances, though, and Schmeichel kept out a fierce 25-yard effort from Antonio before the former Reading striker equalised from five yards closer in.

City were back in front on the hour mark when Knockaert curled in from the edge of the box after Mahrez had been fouled.

However, despite being top of the table, Leicester looked increasingly nervous as the half wore on and they were forced to cling on as their goal came under siege in the closing stages.

Schmeichel lunged with his legs to block a close-range shot from Kieran Lee during six minutes of stoppage time as they held on to give them the victory.

Asked whether he would be watching the results come in on Saturday, he replied: "No.

"My job is to get this club promoted. Whether it's tomorrow, whether it's Tuesday, the next week, the week after it's irrelevant really. It's about getting promotion.

"I want us to win every game that we can and I want us to be champions, but we'll have to fight very hard to do that.

"We'll get promoted as and when we deserve it."

"We got done on a quality finish and that's why Leicester will be champions. They win more games and they score more goals and they've got quality right throughout the team.

"We were a bit disappointed to go a goal down but credit to my players, they grew into the game and I thought at half-time we deserved to go in on level terms.

"Tonight you can get some satisfaction out of the application of the players. For the effort and commitment we put in we deserved something out the game.

"Credit to the players, they rolled their sleeves up and had a right good go."