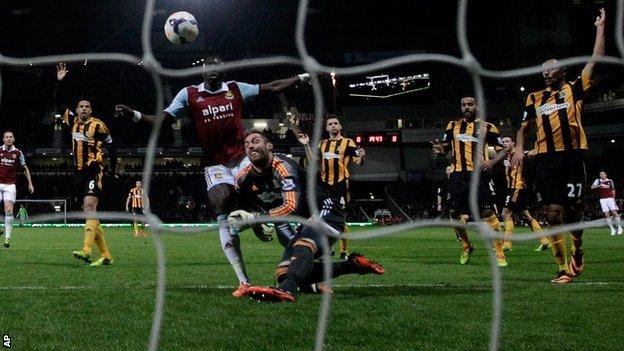 Hull keeper Allan McGregor is expected to miss the rest of the season as he remains in hospital after damaging his kidney in Wednesday's loss at West Ham.

The Scotland international was injured colliding with Mohamed Diame to give away a penalty and earn a red card.

The 32-year-old was taken to hospital where he has spent the past two nights.

"He will be in the high dependency unit for another couple of days," said Tigers boss Steve Bruce. "We think he'll leave hospital in a week or so."

He added: "It's a really nasty injury, the kid's in a lot of pain."

McGregor has missed only six of Hull's 31 Premier League matches since a £1.5m move from Turkish side Besiktas last summer.

His understudy Steve Harper came off the bench at Upton Park and the 39-year-old ex-Newcastle man is set to start Saturday's trip to Stoke.